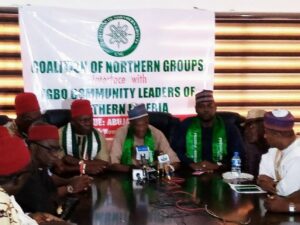 ***Say no ethnic group can dominate another forever in Nigeria

Coalition of Northern Groups (CNG) and Igbo Community Leaders of Northern Nigeria, on Sunday, unanimously said Nigerian leaders have failed the people in their bid to unite and propel the country to prosperity.

The two socio-political groups, which spoke at the end of a joint meeting held in Abuja, said the crop of leaders piloting the affairs of the country, irrespective of party affiliation, has failed to institutionalize the principles of regional cooperation and inclusiveness.

They, particularly, laid emphasis on political appointments and implementation of developmental programmes, especially by the federal government.

A communique read before reporters at the end of the meeting was co-signed by CNG spokesman, Abdul-Azeez Suleiman, and Secretary Igbo Community Leaders of Northern Nigeria, Austin Ifedinezi.

It reads in part: “In furtherance of the meeting between the Coalition of Northern Groups and the Igbo traditional, cultural, and community leaders of northern Nigeria started about three years ago, the two parties met again in Abuja and discussed vital national issues and took far-reaching decisions.

ALSO READ: #EndSARS: What we must do to avert another protest ― Ikpeazu

“That the passing generations of leaders have failed us, and to use this regional cooperation to ensure that we do not fail the next generation by working for an inclusive society that provides at least the most minimal of equal opportunities for all Nigerians.

“To remain vigilant over the direction and fate of our nation, Nigeria, as  major stakeholders in whatever happens in and to Nigeria, but our position on how the nation operates must be informed by enhanced national unity and greater inter regional cooperation.”

The two socio-political organizations in the North noted that no ethnic group can dominate another forever in the country, even as they advised the President and the 36 state governors to resist the temptation to live in perpetual blame of any particular section, tribe, or religious creed for the problems plaguing the nation.

READ ALSO: My next ambition is to be Pastor or Nigeria’s president — Fayose

“No one wins a religious or ethnic war; no ethnic group can dominate another forever; and no benefit comes from fights and conflicts. With an improved trust and sustained cooperation among all regions, sections and faith, Nigeria will overcome its current challenges,” the communique added.

While condemning the manifestations of insecurity in parts of the country, the meeting also counselled the people against derailing the efforts to build a nation where every citizen will be safe and secure wherever he chooses to reside and earn a living.

They also expressed dismay at the undue advantage taken by miscreants to turn the otherwise legitimate protests against SARS into mayhem in some parts of the country, especially the alleged unpatriotic role played by the leader of the Indigenous People of Biafra (IPOB) Nnamdi Kanu during the #EndSARS protests.

CSOs: 50 percent of children in FCT infected with intestinal worms