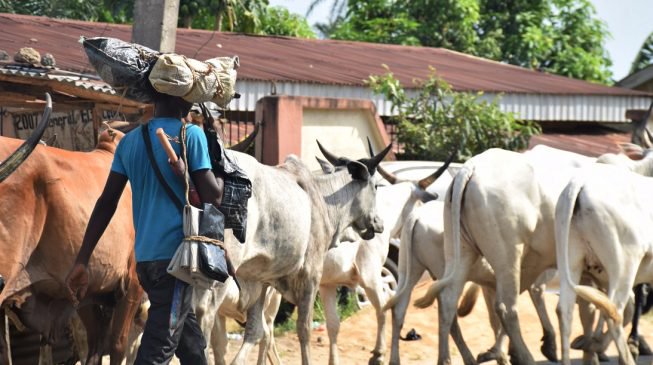 The pan-Yoruba youth organisation, Igbimo Odo Yoruba, has vowed to enforce the seven-day ultimatum given by the Ondo State Governor, Rotimi Akeredolu, to herders to leave forest reserves in the state.

In a statement issued by its President, Olufemi Lawson, on Wednesday, the group said it would mobilise its members towards ensuring the enforcement of the state government’s directive aimed at securing the lives of the people.

The group alleged that the Presidency’s reaction to the vacation order has further confirmed the belief that Fulani herders enjoy the government’s endorsement.

It partly read, “Nigerians should at this point in time be worried more than ever, about how a government will be so brazenly concerned solely about animal lives more than those of human beings, which it swore to protect at all times, under the law of the land.

“We have no further doubt that this so-called federation is at the dangerous edge of its elastic limit; and it’s now destined to break anytime soon.

“We can no longer watch Yorubaland, being put under the siege of the rampaging terrorist herdsmen, who now enjoy the protection of an administration, which once promised to reduce insecurity, but has rather escalated it, thereby exposing a great number of our people to avoidable deaths and loss of property in a manner that history has never witnessed before.

“We wish to remind the Presidency and its internal collaborators in Yorubaland that it is our constitutional right to raise our voices and demand an end to the kidnappings and killings that are taking place across our states on a daily basis and mobilise our people towards putting a stop to these attacks in our land.

“We wholeheartedly endorse Governor Rotimi Akeredolu’s decision, and also wish to state that we are committed to the implementation of the seven-day ultimatum, as we commence the process of mobilising our members towards evicting those criminal elements from our communities. We are saying enough is enough and an end must be put to the mindless kidnapping and killing of our people, aided by the nonchalant attitude being displayed by the Federal Government and its security agencies.

“While we recognise the right of legitimate herders and farmers to do their businesses wherever they choose, such must be done in compliance with government procedures and laid down rules governing our states and communities. As we will no longer tolerate any group, no matter how highly connected, to desecrate our land any further.

“Finally, let it be restated that after the expiration of this ultimatum by the Ondo State government, any reported case of kidnapping or killing will leave us with no option but to mobilise our people, to enforce compliance and get sanity returned to our communities and forest reserves.”

Akeredolu had on Monday issued a statement giving herdsmen seven days to vacate all forest reserves in the state due to the high rate of kidnapping in the state.

This was, however, condemned by the Presidency, which urged the governor ‘not to act outside the constitution of the country’.