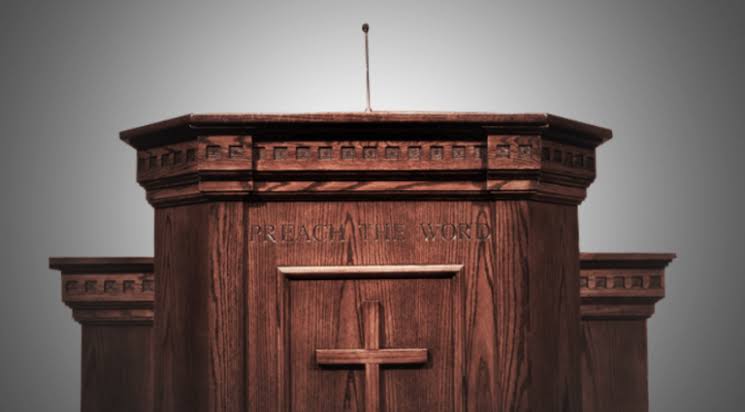 The Psalmist proclaimed in Ps 23 that the Lord is his Pastor, that he lacks nothing! Please, take time to read and re-read this Psalm to find out what would be your lot if God (Jesus Christ) were your Pastor …and compare it with what has been your lot since man has been your pastor.

The LORD is my shepherd; I shall not want.
He maketh me to lie down in green pastures: he leadeth me beside the still waters.

He restoreth my soul: he leadeth me in the paths of righteousness for his name’s sake.Yea, though I walk through the valley of the shadow of death, I will fear no evil: for thou art with me; thy rod and thy staff they comfort me.

Thou preparest a table before me in the presence of mine enemies: thou anointest my head with oil; my cup runneth over.
Surely goodness and mercy shall follow me all the days of my life: and I will dwell in the house of the LORD for ever.

If you’ve just read through this Psalm with good understanding, you would see how loaded it is with wonderful benefits. There is no good thing that is not provided therein and that’s the beauty of having the Almighty as one’s pastor or shepherd instead of man.

Jesus Christ says he is the good shepherd in John 10:11 because he lays down his life for the sheep (the church). (Note very carefully that he laid down his life for his sheep in that his life counted for nothing other than wining souls for God’s kingdom. His life only revealed the glory or kingdom of God, nothing more, nothing less and nothing else!!! He lived only for the welfare of the flock and for God’s glory alone. No personal goals or ambitions or need for relevance was associated with Christ. He was indistinguishable from his followers and he demonstrated his message with his very life!! He trusted God to the extent that he agreed to die and be raised the third day just to reveal the glory of God.

God is faithful to have raised him the third day just as he promised. Could you trust God to that extent? Or, do you trust God at all? He substituted his will with that of God, all the time. That’s how to lay down one’s life. John the Baptist and the rest prophets did the same thing in their times. You lay down your life by the way you live…. you don’t have to die in order to lay down your life. It may include death sometimes but not all the time.)

He didn’t stop there, he went further to command us never to ascribe the office of the pastor or shepherd or leader or overseer etc. to any human being since only he is qualified to occupy that position while the rest of us are equals or classmates Matt 23:8-10. Of course, he’s wasting his time as far as Christians are concerned because they won’t listen. Never! They would go on and create a hierarchy of leaders in the church and pattern it after the world and if you challenge them, they’d wonder how a church could run without those leaders, clearly stating their unbelief in Christ.

You might have to re-read the Psalm to see which one of the benefits therein could be provided by a human pastor. Please note very carefully that he is not a good shepherd, instead, he is the good shepherd (Pastor, G.O, G.S, Bishop, etc.) so that others who go by the name Pastor, Shepherd, G.O, G.S, Bishop, Pope, etc. are bad. All such religious people who go by such names are interlopers, liars, thieves and robbers and would be dealt with by God in due course – Matt21:41.

Why is it so? These evil human Pastors never lay down their lives for the church members (the sheep), instead, their sheep lay down their own lives for these bad, evil Pastors. These Pastors live large on the resources of the members while the members live in penury with empty, godless promises as the only benefit from their slave masters. Whereas Jesus Christ was the same as his followers in every material particular such that it required a Judas to identify him and betray him to his assailants, human Pastors are totally different from their members and always stand out due to their obscene display of stolen wealth. Jesus never sought honour from men but these ‘pastors’ are always craving honour and relevance from people.

They are not only filthy rich, they compete among one another as to who would be the richest and loudest in display of illicit wealth by building monstrosities that cost billions as churches, flying private jet planes, establishing banks and universities, building roads, etc. While they fly about in private jets, their congregants beg for transport fares after church services and if they get sick or are in dire need, the Pastors won’t be accessible to them. The pastors collect tithes and offerings, first fruit offerings, etc. for purposes alien to Jesus Christ like building churches, Banks and Universities which their poor members cannot participate in.

Pastors set up the church as an enterprise where they trade with souls of men to raise monies that fund their criminal empires. If you read the parable of tenants in Matt 21, especially verse 41, you’d weep for pastors because their punishment would be terrible.

Mat 21:41 They say unto him, He will miserably destroy those wicked men, and will let out his vineyard unto other husbandmen, which shall render him the fruits in their seasons. (He’s directly addressing pastors here.)

Pastors are not just liars, they are one big lie that has been punctured by Jesus Christ severally but people are not aware. Jesus Christ (in Mark11:15-18) beat them black and blue and kicked them out of the church, openly invalidating their ‘authority’ such that the people then saw the emptiness of their so-called pastors and left them to follow Jesus. All they had was empty religious words that couldn’t open blind eyes or heal anyone let alone raise the dead just as it is with today’s Pastors.

Mat 21:12-17 And Jesus went into the temple of God, and cast out all them that sold and bought in the temple, and overthrew the tables of the moneychangers, and the seats of them that sold doves, And said unto them, It is written, My house shall be called the house of prayer; but ye have made it a den of thieves. And the blind and the lame came to him in the temple; and he healed them. And when the chief priests and scribes saw the wonderful things that he did, and the children crying in the temple, and saying, Hosanna to the Son of David; they were sore displeased, And said unto him, Hearest thou what these say? And Jesus saith unto them, Yea; have ye never read, Out of the mouth of babes and sucklings thou hast perfected praise? And he left them, and went out of the city into Bethany; and he lodged there.

Luk 20:46 Beware of the scribes, which desire to walk in long robes, and love greetings in the markets, and the highest seats in the synagogues, and the chief rooms at feasts;

Luk 20:47 Which devour widows’ houses, and for a shew make long prayers: the same shall receive greater damnation.

These human Pastors are blind, leading their equally blind following to the pit. They aren’t preaching the same gospel that Jesus preached. They have since changed the gospel which is fundamentally for the poor and afflicted of this world (promising them another kingdom since they have lost out in this world Matt 11:5, Isa 61:1-) to accommodate the materially rich politicians, drug barons and all manner of people of means because the Pastors are looking for money and not the kingdom of God. Fortunately for these Pastors, the Bible is full of contradictions in its internal dialogue so they always could find scriptures that justify their evil but such contradictions are never found in the words of Christ. In Matt 23:33, Jesus called them children of snakes and wondered how Pastors could escape the damnation of hell. You may read the entire chapter 23 to get the whole connection.

Luk 22:36 Then said he unto them, But now, he that hath a purse, let him take it, and likewise his scrip: and he that hath no sword, let him sell his garment, and buy one.

Matt 10:8 Mat 10:8 Heal the sick, cleanse the lepers, raise the dead, cast out devils: freely ye have received, freely give.

Pastors insist that others fund their swank life styles but we must know the truth and be set free. Their insistence on defrauding the congregation is rooted in Paul. Of course, pastors would always find refuge in Paul’s phoney epistles.

Apart from Jesus Christ, any other mediation between God and man is a bloody lie intended to rob us of our money and mislead us. Pastors are dogs in a manger: uninterested in God’s kingdom, they won’t let us in because they are now selling God to us. When they are not demanding that we pay to serve God, they are intimidating us by ignoring the poor and celebrating the rich in our churches.

They always use the widow’s mite story to railroad us into surrendering our treasuries to them but it was actually a robbery of the widow that Jesus Christ was concerned about. She gave her last with all her heart to God and the godless pastors collected it from her instead of giving to support the poor woman for whom the monies are collected in the first place.

Once you set up a formal religious group where members are not equals and peoples’ lives are controlled by doctrines order than Christ’s, it becomes a case of blind leaders leading their blind following to the pit as it is in Christianity today. Christians are my greatest antipathy because whereas they are supposed to be followers of Christ, they are direct enemies and haters of Christ and of God’s kingdom.

Christians have been totally messed up by pastors who daily load them with rubbish instead of the teachings of Christ. Beware of Pastors! They are not just liars, they are a lie! Pastors are enemies of God but you’d never know until you’ve mastered the doctrines of Jesus Christ.

The post Who is your pastor? appeared first on Vanguard News.

BOKS FLEX DEPTH: Who are the six uncapped players?