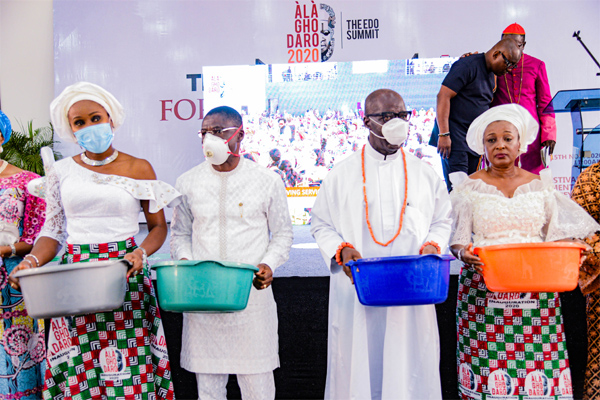 The Edo State Governor, Mr. Godwin Obaseki, has reassured that his administration is devising a new state-led security scheme to tackle rising insecurity in an effort to safeguard lives and property in Edo State.

The governor said this has become inevitable in the light of the flawed central policing system in the country, which makes the demand for restructuring of the nation more germane.

Obaseki, who said this during a thanksgiving service to commemorate his inauguration for a second term in office, charged religious bodies, communities and other stakeholders to join hands with the government to ensure the success of the state’s community policing initiative so as to ensure safety in communities.

“We must now adopt new security plans in our religious centres, schools and communities. We, as a state, will be investing in our intelligence gathering system. We know that citizens may not trust the information they give out to some agencies. But we are putting up a system where we will make you trust us when you give us information. We will make sure that the information is acted upon. We have completed a design of our own correctional facility and will start building it.”

“We are going to try to reduce our lamentations and do things for ourselves and that way, we would have started the process of restructuring the country,” the governor said.

According to him, “I want to assure you, men of God and the entire Edo people, that we have no doubt in our minds that we are in office to serve God’s purpose and we believe that his purpose is served when we serve Edo people with everything we have got.

“We know that it is going to be quite challenging particularly with what is going on around the world, but God never gives you a mission without giving you the means to accomplish the mission.

“We still haven’t seen the full consequence of what we have experienced so far this year. With the report we are getting, COVID-19 is back again. We have to do our best, but we won’t be able to lockdown again; we must obey the rules of our taskforce.”

The governor continued: “We must restructure the country. There is no doubt about that. But we must start it from home, which is our local government. That is the first point that citizens have contact with the government.

“There is nobody who is more concerned about the current security situation in our state than I am. When I saw that we were not making progress in getting back the escaped inmates, I went to obtain their names from the Controller General of the National Correctional Service.

“The point I am trying to make is that we are concerned as a government. I called the Inspector General of Police, Mohammed Adamu and told him that I was worried that his men were being killed.”

“It is bad enough if citizens are killed. But the worry is that when people go out with impunity to attack and kill the police, when they finish doing that, they will come back and kill the citizens.”

“The IG has responded and we are still waiting, but the point I am trying to make is that we have come to the point that we must now secure ourselves. We can no longer continue to wait for help from anywhere; let us do what we can,” he said.

Obaseki said the prevention of crime in the society should be a collaborative effort between the government, members of the community and the police.

He noted: “We must be able to report those that are coming to our communities to carry out criminal acts. If they are children from the community, we should also stand up and give information so that they can be taken for correction.”

Earlier, the Archbishop of the Metropolitan See of Benin, Rev. Augustine Akubeze, during his homily, said “Election has come and gone and the results declared. The winners have been sworn – in to serve a second term. So, we congratulate you and your deputy, Philip Shaibu. We urge you to remain humble and be magnanimous in victory.

“Edo people are expecting much good infrastructural development. Edo people need security from you; you are governor of Edo, both those who supported you and those who didn’t.”

“The government must work to confront the security situation in our land and I have come to see how passionate you care about the welfare of the people. You are a politician with a difference. You don’t play politics with people’s welfare,” he added.

Also Speaking, Rev. Felix Omobude, President of the Pentecostal Fellowship of Nigeria (PFN) reassured the governor of the support of the Christian community in the state.