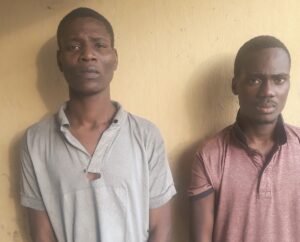 Operatives of the Force Special Intelligence Response Team, IRT, have arrested two members of a notorious kidnap and sea piracy syndicate terrorizing seafarers travelling along the Gulf of Guinea and Bayelsa and Rivers State.

Vanguard gathered that the suspects, identified as Kelvin Dikuro, aka General Small Voice and Erememi Captain, A.K.A Nwalanta, were arrested recently, when operatives of the IRT, who had received several intelligence reports about their activities, trailed them to their hideouts in Bayelsa and Rivers States, where they were apprehended.

Sources disclosed to Vanguard that the suspects, had taken part in several sea piracy operations, where they hijacked foreign vessels plying the Gulf of Guinea and kidnapped crews on board the vessels and released them after huge amounts were paid as ransom. The source added that the suspects were also fingered in the 2019 attack and bombing of a Nigeria Navy house boat, patrolling the creeks of the Southern Ijaw area of Bayelsa State and killing all the soldiers on board.

Vanguard learnt further that some of the intelligence which led to the arrest of the suspects who were also linked to the May 2020, kidnapping of the father of Sagbama Local Government Chairman of Bayelsa State, were generated by officials of the Nigeria Navy, who regularly patrolled the Gulf of Guinea and it was passed on to operatives of the IRT led By Deputy Commissioner of Police, Abba Kyari.

When Vanguard interviewed the suspects, they gave details of their modus operandi and narrated how they attacked foreign vessels, kidnapped their crews and killed naval personnel on patrol.

24-year-old Kelvin Dikuro, alias General Small Voice, who is a native of Nembe Local Government Area of Bayelsa State, in his confession said:

“I am not General Small Voice, that name belongs to my elder brother who is dead. My brother was a kidnapper, he was also into oil bunkering but he was killed because of his recklessness in our community.

“My brother had five Ak-rifles which he bought because of his business but he was killed on August 17, 2017, after he was released from police detention.

“After my brother’s death, I inherited his guns, formed a five-man gang and we ventured into kidnapping.

ALSO READ: Corpse of my son killed by SARS yet to be released for burial 7 months after — Father cries out

“We kidnapped nine foreign sailors from their vessel in January 2019, at the sea in Bayelsa State and we took them to New Jerusalem Island in Buguma Local Government Area of Rivers State.

“We kept them for 14 days and fed them with noodles. One of my brother’s friends known as Commander Sunday, was the person communicating with relatives of the victims and the sum of N5million was eventually paid as ransom for the release of the sailors.

“The second kidnapping we carried out was also on the high sea in Bayelsa State where we kidnapped five foreign sailors again with our magazines loaded with 30 rounds of live ammunition on each of the rifles.

“We took our victims to New Jerusalem Island and Sunday did the negotiation for the ransom and the sum of N10million was paid as ransom before they were released. I got N1million as my share of the ransom.

“We also carried out two sea pirate operations where two persons were killed. I wasn’t in town when the kidnapping of the father of the Sagbama Local Government Chairman took place.

“I was in Omoku in Rivers State with my family when it happened and I got a call from one Preye, who informed me that my gang members were behind the kidnapping.

“He wanted me to negotiate the release of the man and he gave me the sum of N1.3million to take into the creek and give to my boys.

“I fled with the money because Commander Sunday who was with my guns, led the kidnapping and he didn’t brief me about the operation or the amount he was negotiating as ransom.

“I was arrested in my house in Omoku, one week after I collected the money and I don’t know if the father of the Sagbama Local Government Chairman has been released”, he narrated.

In his own confession, Erememi Captain, alias Nwalanta, who was a fisherman, based in Yenagoa, Bayelsa State, but ventured into sea piracy and oil pipeline vandalism, when he met a friend identified as Owei, said; “Owei was the person that introduced me into sea piracy and kidnapping and I have gone out with his gang on several operations.

“The leader of our gang was Moriekem who is from Southern Ijaw. The first kidnapping I was involved in was the kidnap of some oil workers and a military officer at Ayama Town.

“10 of us went for that operation and all of us were armed with Ak-47 rifles loaded with 120 rounds of live ammunition each.

“The second kidnap was at Dodo North oil Rig belonging to Shell Petroleum Development where we kidnapped one of the workers on the rig at Ekeremor Local Government area of Bayelsa State.

“It was Moriekeme who negotiated with the company and I don’t know how much was paid as ransom but I built a house with my share of the ransom.

“We also attacked and destroyed a Navy house boat with dynamite killing all the soldiers onboard the house boat at Ekeremor. The reason we carried out that operation was because the Navy house boat had been destroying our camps where we were keeping our kidnapped victims and illegally refined petroleum products.

“Our gang also ambushed and killed four soldiers and took away their rifles. All our rifles were kept in the creek by Moriekeme. We also killed some soldiers at southern Ijaw in June 2020.

“We attacked a merchant vessel named Ambica in Dodo River and killed four military officers attached to her and went away with their rifles.

“I have also gone for kidnapping in Rivers State where the police engaged my gang and in the process I was hit with a bullet on my right hand but we managed to escape. I also belong to a cult group called Green lander. It was Morikeme who initiated me.”

The post We made millions of naira from ransom on kidnapped victims — Suspects appeared first on Vanguard News.