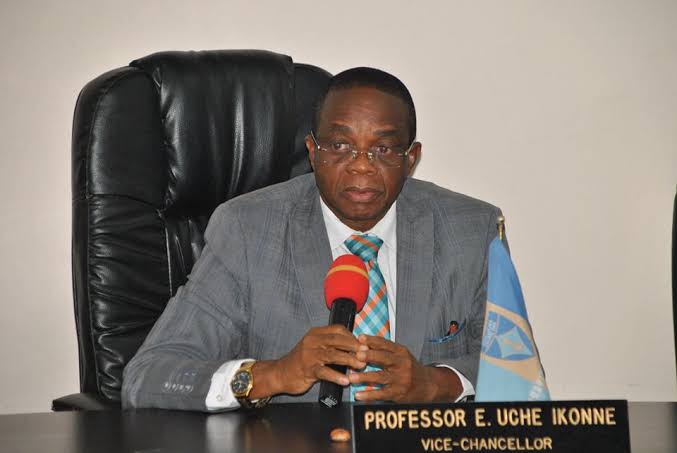 The Vice-Chancellor of Abia State University, Uturu, Prof Uchenna Ikonne has denied the alleged mismanaged N5 billion development grant from TETFUND to the University for various development projects, insisting that projects are still ongoing in the various campuses of the institution.

According to Ikonne, every university is entitled to such interventions which TETFUND is part of and which is strictly monitored by TETFUND.

“Every university is entitled to an intervention which TETFUND is part of. Apart from releasing a fund to a University, TETFUND follows up to make sure that the money is utilized for that particular project. If a particular stage of the project is not completed, they don’t release further funds for the next stage of the project.

“This is how they work. During our time, we applied for a high impact fund, which we got N3 billion and it was announced in the Senate. The projects are going on in the three campuses of Uturu, Aba and Umuahia, right now and they have not been completed.

“For some people to say that it was mismanaged means that the person does not know how it is funded. We have never gotten sponsored research but it happened during my time and we got three through TETFUND and this has been utilized. ABSU has become a hub of research. Going through the laboratories, it can testify the amount of work we have put into it”, ikonne explained.

On the controversial COVID-19 pandemic prevention fee which has since been dropped, Ikonne explained that it arrived at and announced after due consultation with the governing council of the University, the student union government and the State Government, following the pressure to resume school and also meet the approved standard set by the National Centre for Disease Control.

“The pressure to resume the school administration caused the announcement of the pandemic prevention fee. Remember, we were about to write exams for the first semester of the academic year when the COVID-19 pandemic started. There was a consultation from all angles and a collective agreement by all organizations concerned. Unfortunately, it was received like that. The council consulted very well before the announcement was made. I take the responsibility for it. I am not shying away from it”, the Vice Chancellor said.

On the issue of salary arrears in the institution, Prof. Ikonne attributed it to the pandemic which he said affected the revenue of the school since students were at home.

He assured the students that the school management was doing everything possible to put things right and avoid putting their lives at risk before asking them to return back to school.

“We have to put things right. People are testing positive at the National Youth Service Corps camp. We can’t bring students without putting things in order. We are working on bringing them back”, Ikonne assured.

The post We did not mismanage TETFUND grant in ABSU — VC appeared first on Vanguard News.