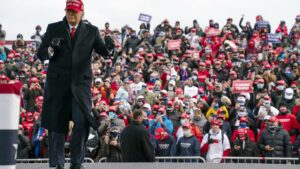 Thousands of Donald Trump supporters rallied in United States capital city, Washington, on Saturday, with the nation’s president making a drive-past in his motorcade as he sticks to discredited claims that mass fraud denied him election victory.

Several thousand people had gathered by noon on the city’s Freedom Plaza, with more still arriving from all sides, waving flags and shouting “Four More Years” in a festive atmosphere reminiscent of a Trump rally.

With right-wing militia group the Proud Boys also among those rallying, a large security presence was deployed in the capital to prevent clashes with anti-Trump events scheduled outside the Supreme Court.

But Margarita Urtubey, 49, a horse breeder who flew in from Miami with her sister, told AFP the election was “so corrupt,” adding “Trump won by a landslide. We are here to march for the ‘stop the steal’ of this election, to make our voice heard.”

Darion Schaublin, who drove from Columbus, Ohio, came to protest the fact “the whole system’s rigged… in the way that the information is getting to the people.”

“The truth never actually gets out,” said the 26-year-old, who says he lost his job in a restaurant after refusing to wear a mask as protection from Covid-19.

Schaublin estimated there was a “95 per cent” chance Trump would not have a second term — “and I’m not sure of the legitimacy of that.”

The final two undeclared states were called on Friday by US television networks — with Biden winning the former Republican stronghold of Georgia in a close race, and Trump winning North Carolina.

President Trump continues to impede Biden’s ability to prepare for his transition ahead of inauguration on January 20 and has filed numerous lawsuits — unsuccessfully — to challenge vote counts around the country.

On Friday, a judge in Michigan issued another rejection of Republican claims of fraud.

Trump said Friday that “time will tell” if he remains president, in a momentary slip of his unprecedented refusal to concede his election defeat.

Trump broke his silence after a week without on-camera comments, speaking at a Rose Garden event to herald the imminent authorization of a coronavirus vaccine.

During a short speech about the vaccine work, Trump insisted that he would never again call for a lockdown to curb the virus’s spread.

Then he added, “Whatever happens in the future, who knows which administration it will be, I guess time will tell.”

The hint of doubt came despite him continuing to claim that mass fraud — for which no evidence has been produced — robbed him of victory in the November 3 election.

Despite his own intelligence officials’ declaration Thursday that the election was “the most secure in American history,” Trump and his right-wing media allies show no sign of giving up their quest to get the results overturned.

After driving past demonstrators in Washington, Trump headed Saturday to his golf club outside the capital on his regular weekend routine.

Half a dozen supporters stood at one side of the entrance with Trump flags, and about the same number stood on the opposite side with a big “Biden Harris” sign and one that said: “We voted. You’re fired.”

Biden is steadily preparing for power, with many world leaders congratulating him on his victory.

China was the latest nation on board, with a foreign ministry spokesman saying, “We express our congratulations.”

Are you justifying their killings? Nigerians question Garba Shehu for saying slaughtered Borno farmers had no military clearance to farm

Are you justifying their killings? Nigerians question Garba Shehu for saying slaughtered Borno farmers had no military clearance to farm