The 2020 Ibrahim Index of African Governance (IIAG), launched on Monday by the Mo Ibrahim Foundation, highlights a decline in African governance performance for the first time since 2010. New data delivers a clear warning: governance progress in Africa has slowed since 2015, and declines for the first time in 2019. Deterioration in participation, rights, rule of law and security threatens improvements achieved in economic opportunities and human development. This is particularly concerning with the COVID-19 pandemic set to increase existing challenges and reduce hard-won gains. Excerpts:

Africa’s Overall Governance progress slows, and score declines for first time in 2019 The 2020 IIAG, with an updated framework and strengthened indicators, shows that although African governance has improved since 2010, progress has slowed in the last five years. Indeed, the 2019 Overall Governance score concerningly registers a year-on-year decline for the first time in the decade. Additionally, the continent’s path towards sound governance is uneven, with economic opportunity and human development improving at the expense of worrying declines in participation, rights, inclusion, rule of law and security. This is all the more concerning with COVID-19 set to worsen already existing challenges and reverse any positive gains and with Africa’s citizens already expressing increasing dissatisfaction with governance delivery in their countries.

The new Ibrahim Index of African Governance (IIAG) has undergone an in depth-review in 2018-2020. The new updated conceptual framework reflects the evolved governance landscape and is based on strengthened indicators, thanks to better data availability on key African governance dimensions.

The 2020 IIAG results show that governance in Africa has improved over the last decade (2010-2019), with more than 60% of Africa’s population in 2019 living in a country where governance has improved since 2010. However, progress has slowed down over the last five years. Concerningly, the 2019 African average score for Overall Governance even registers a decline for the first time since 2010, while between 2010 and 2018 it had either improved or remained constant year on year.

The 2020 IIAG provides a picture of the continent until the end of 2019, just before it was hit by COVID-19. In terms of rights, civil society space and participation, the continent had long before embarked on a deteriorating path and the pandemic simply aggravated this existing negative trajectory.

Conversely, economic opportunity was set on a positive course of sustained progress, and the impact of COVID-19 is now threatening the hard-won achievement in this area.

Governance performance is not meeting Africa’s citizens’ growing expectations. Public Perception of Overall Governance has deteriorated over the last ten years, at twice as quick a pace since 2015, and registers the lowest score of the past decade in 2019.

While more than half of the countries have improved their governance within the last decade, progress appears unbalanced: 20 countries improved in Human Development and Foundations for Economic Opportunity, which are the main drivers of Overall Governance progress. But at the same time their performance in Security & Rule of Law and Participation 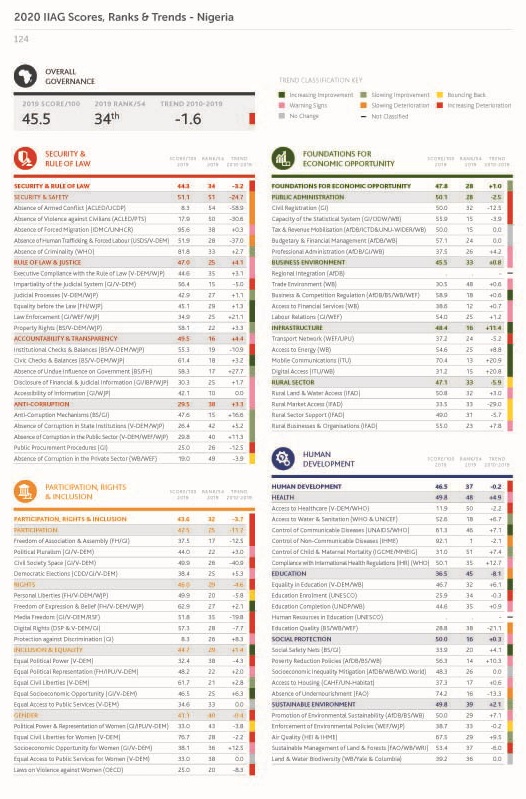 Only eight countries have managed to improve in all four governance categories over the decade. This growing imbalance might threaten the sustainability of overall governance progress.

Ranks are not a definite given. Some high-ranking countries, such as Mauritius, Botswana or South Africa, though still currently ranking 1st, 5th and 6th, follow a concerning path of deterioration since 2015. In contrast, some lower-ranking ones such as Gambia (16th), Côte d’Ivoire (18th) and Zimbabwe (33rd) feature among the five largest improvers over the decade. Somalia, ranking 54th, is the 7th most improved country over the last ten years.

Besides a balanced approach to governance progress, rule of law, justice, inclusion and equality appear to be the main common denominators among best performing countries.

However, since 2015 continental progress has lost pace, with the annual average pace of progress in the last five years (+0.05) being less than half that over the decade (+0.13).

Deteriorating over the decade, Participation, Rights & Inclusion worsened its decline since 2015, while Security & Rule of Law continued deteriorating albeit at a slower pace. Meanwhile, Foundations for Economic Opportunity and Human Development, despite continuing to improve, have done so at a slower pace.

This concerning trend has paved the way for the first year-on-year decline (-0.2 in 2019 compared to 2018) in the African average score for Overall Governance since 2010, after having improved or remained constant year-on-year until 2018.

The 2019 decline is driven by a deteriorated performance in three of the four IIAG categories: Participation, Rights & Inclusion, showing the largest decline between 2018 and 2019, followed by security and rule of law and human development.

The 2020 IIAG provides a picture of the continent before it was hit by COVID-19. In terms of Participation, Rights & Inclusion, progress was slowing long before the pandemic, which only worsens the existing negative trajectory. Conversely, economic opportunity was set on a positive course of sustained progress, and the impact of COVID-19 is now threatening this hard-won achievement.

In 2019, new analysis of the Citizens’ Voices section in the IIAG reveals that Public Perception of Overall Governance registers the lowest score over the decade, with the pace of deterioration nearly doubling within the last five years.

A balanced approach to governance is key to progress, as well as improvements in rule of law, justice, inclusion and equality.

The strongest correlations of Overall Governance performances are found with the sub-categories Rule of Law & Justice and Inclusion & Equality. The indicators showing the strongest relationships with high overall governance scores span all four IIAG categories, underlining the importance of a balanced approach to governance.

The growing imbalance between the various governance dimensions outlined above is likely to threaten overall governance performance.

For all four sub-sections, the respective 2019 African average scores are the lowest across the whole ten-year time-period.

In more than half the countries surveyed (23), citizens are less satisfied with their country’s governance performance than ten years ago. For most countries, the deterioration in Public Perception of Overall Governance has even worsened since 2015.

Progress towards governance is unbalanced and might prove unsustainable.

Progress in Overall Governance over the past decade has been driven by the categories Foundations for Economic Opportunity (+4.1) and Human Development (+3.0).

The biggest strides have been made in the sub-categories Infrastructure and Health, complemented by improvements in Sustainable Environment.

However, in the same period, countries have shown concerning declines in Participation, Rights & Inclusion (-1.4) as well as in Security & Rule of Law (-0.7).

Here, a deteriorating security situation and an increasingly precarious environment for human rights and civic participation are the primary drivers.

In 2019, Human Development is the highest scoring of the four categories at the African average level, while Participation, Rights & Inclusion is the lowest scoring category with a difference in score of almost six points.

This is reflected at country level. Over the past decade, 20 countries, hosting 41.9% of Africa’s population, have made progress in Human Development and Foundations for Economic Opportunity.

But at the same time have deteriorated in both Security & Rule of Law and Participation, Rights & Inclusion.

Only eight countries manage to improve in all four categories over the decade: Angola, Chad, Côte d’Ivoire, Ethiopia, Madagascar, Seychelles, Sudan and Togo.

Of these, Ethiopia is the only country improving in all 16 sub-categories over the decade.

In Overall Governance, for the tenth consecutive year, Mauritius maintains its top position in 2019 with a score of 77.2 while Somalia remains bottom with a score of 19.2.

However, the two top and bottom countries follow opposing trajectories as the gap between them shrinks to its lowest over the decade in 2019.

Mauritius’s Overall Governance score has been declining at an increasing rate, driven by weakening social protection and a deteriorating environment for human rights.

On the other hand, Somalia’s Overall Governance score has increased by +5.7 since 2010, on the back of improved infrastructure and increased gender equality, among other things.

South Africa, ranked 6th, has declined over the decade, even at an increased pace since 2015, while 5th placed Botswana is starting to show warning signs.

Still ranking respectively 16th, 18th and 33rd, Gambia, Côte d’Ivoire and Zimbabwe feature among the five most improved countries over the decade.

Mo Ibrahim, Chair of the Mo Ibrahim Foundation, says: “This is a testing time for Africa. Pre-existing weaknesses and challenges in African governance, as uncovered by the 2020 IIAG, are exacerbated by COVID-19, which also threatens economic progress. Citizens’ dissatisfaction and mistrust with governance delivery are growing. African states have an opportunity to demonstrate both their resolve to safeguard democracy and their ability to drive a new growth model that is more resilient, more equitable, more sustainable, and more self-reliant.”