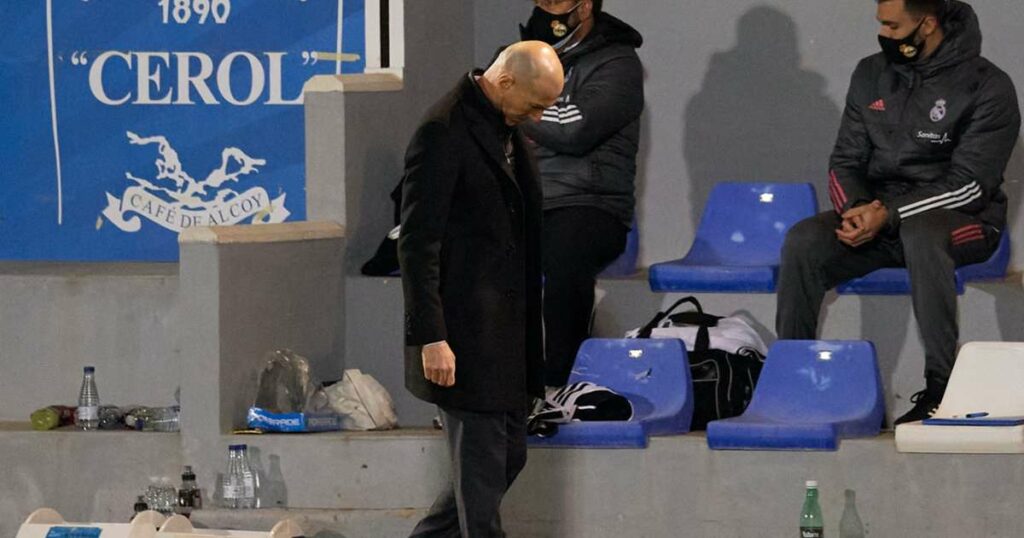 Zinedine Zidane and Real Madrid found no sympathy on the front pages of the Spanish sports press on Thursday after their shock Copa del Rey exit to third-tier Alcoyano.

The future of coach Zidane is back under the spotlight after the painful extra-time defeat that saw Juanan score in the 115th minute to earn a famous 2-1 victory.

Marca’s front page showed Zidane, head bowed, walking away from the scene of one of Madrid’s worst cup defeats.

Its headline said: “No one escapes this embarrassment.”

Tumbling out to opposition from Segunda Division B was all the more pitiful given Alcoyano had been reduced to 10 men before they snatched their late winner.

In an editorial, Marca’s Hugo Cerezo said the loss revealed a “deep crisis” at Madrid and claimed that Zidane’s position was at serious risk.

“If he is saved from this, it is a miracle,” wrote Cerezo. “His position now hangs by a thread, on the edge of the abyss.”

Marca reported elsewhere on its website that Madrid directors hope to avoid making major decisions now and to hang on until the end of the season.

Zidane said after the game that it had been “another painful day” but that he believed the players still backed his leadership.

Having also lost in the semi-finals of the Supercopa to Athletic Bilbao last week, Madrid are having a grim time of it.

AS described Madrid’s exit in much the same way as its fellow Madrid-based newspaper Marca, with a headline of “Embarrassment” followed by subheadings of “Second title gone in a week for Los Blancos” and “Zidane is hurt”.

The Barcelona-based Mundo Deportivo said the setback “opens another crisis” for Zidane, with its headline of “Humiliation” accompanied by scenes of joy among the Alcoyano players.

Columnist Josep M Artells wrote of “another embarrassment” and said critics would again look to Zidane, adding: “His management is more in question than ever.”

Sport, another Barcelona daily operating out of Barcelona, also chose a single-word headline – going with ‘Castanazo’, a word which can mean great slap or punch.

That was reflected in the words of pundit Cristobal Soria, who on television show El Chiringuito said: “Today is a historic day, we are witnessing the biggest ridicule in the history of Real Madrid.”