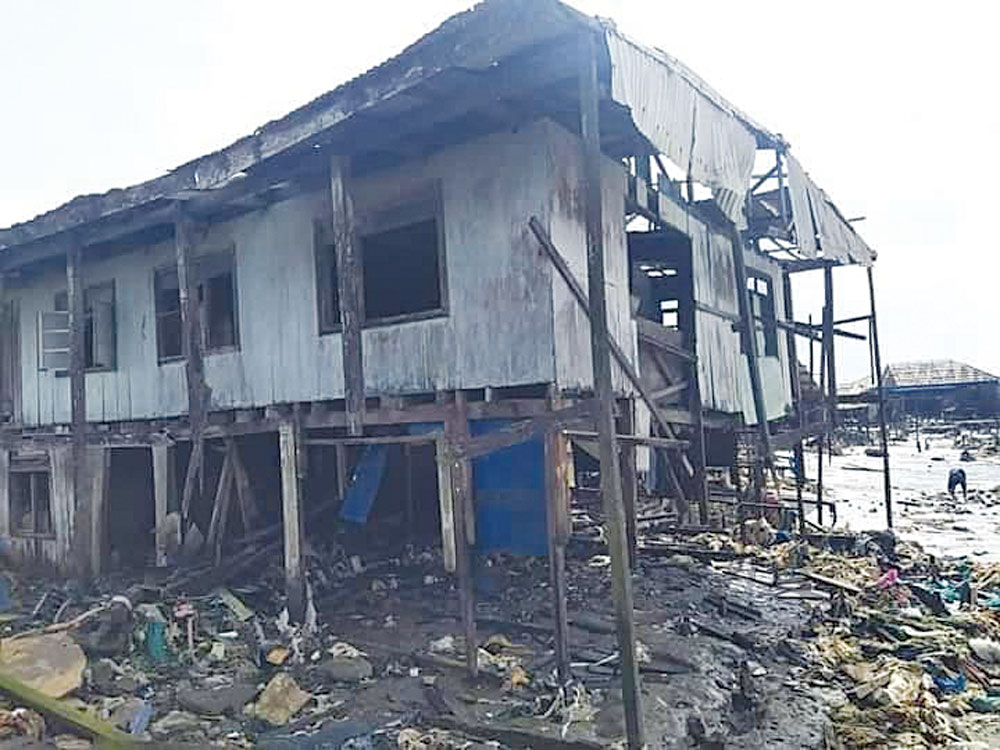 *Help is on the way— NDDC

AYETORO, a religious community in the oil-rich Ilaje council area of Ondo State means the Happy City because of its stoic nature to pain and pleasure.

Unfortunately, the community is gradually becoming a Sad City, no thanks to the debilitating effects of the ravaging sea incursion on the community and its inhabitants.

This perennial sea surge, in the last 16 years without any solution in sight, has become a nightmare to the people of the community.

Vanguard gathered that the religious community, which is about 20 kilometres landmass away from the sea, now sadly has a larger part of its buildings under the sea.

If nothing concrete is done to address the ugly situation, that had displaced thousands of people in the thickly populated community, the Ilaje coastline is in danger as the people may have no place to be called their homeland in few years to come.

Ilaje remains the only oil-producing community in Ondo State which contributes about 60,000 per barrel of crude oil per day to the country’s oil production, yet they have been neglected by successive governments.

Ayetoro community was initially about 15-20 kilometres landmass away from the sea, but sadly it has a larger part of its buildings under the sea.

Findings showed that more than 2000 buildings have been destroyed by the angry waves while more than 85 percent of the entire land of the Happy City had been claimed. 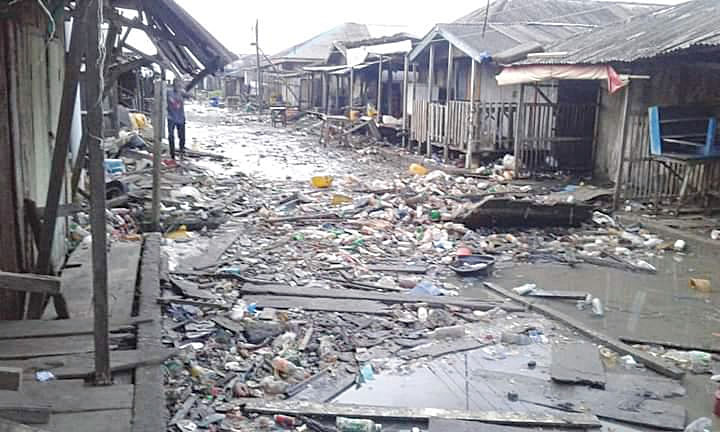 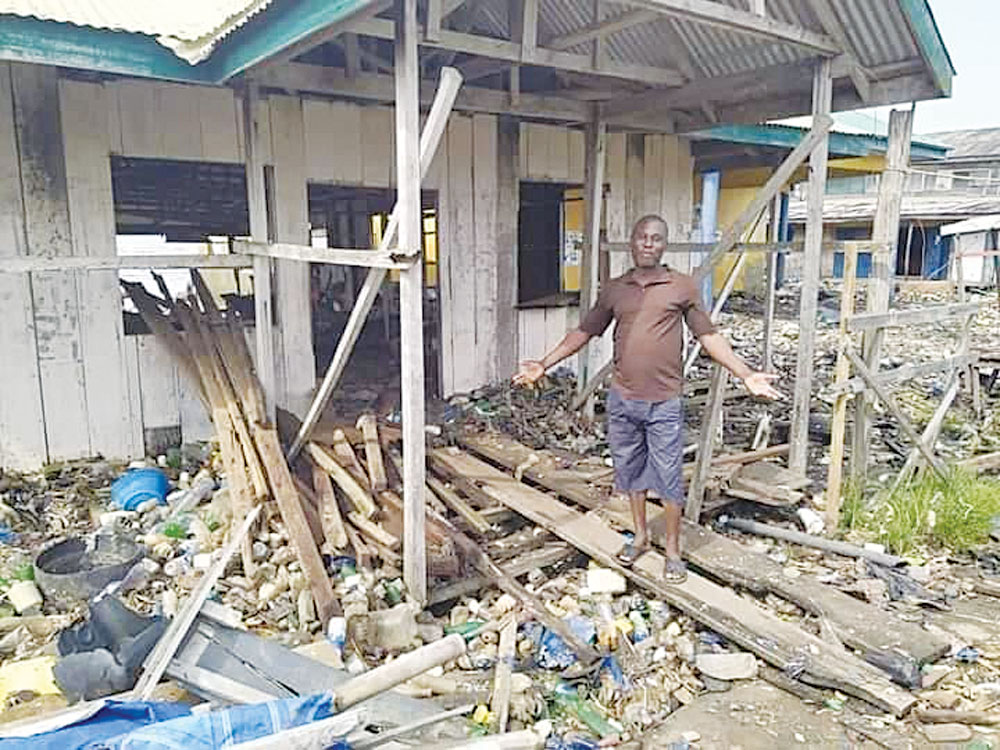 The Ondo ocean surge started in the year 2000. To forestall a reoccurrence, in December 2004, the Niger Delta Development Commission, NDDC, awarded the shoreline protection works to Gallet Nigeria Limited at the cost of N2.4 billion while N600 million was released as mobilisation fee to the contractor.

The company, thereafter, mobilised its equipment to Aiyetoro but the contract was later terminated in 2008 by the Commission due to alleged lack of technical skill and neglect of the project by the company.

It was, however, showed that in 2009, the project was re-awarded by the Commission to Atlantic Dredgers Limited, DAL, at the cost of N6.2 billion and another N950 million was paid to a new contractor as mobilisation fees.

Dredging Atlantic Ltd, it was alleged, also abandoned the project like the first contractor even after moving their equipment to the area.

Funds said to have so far been released by the NDDC for the shoreline protection of Aiyetoro Community was put at about N 3.3 billion and the project was yet to take off.

The contractors reportedly complained of the dearth of sand to do the sand-filling works.

Aralu said: “The surge occurred at midnight when many people had retired to bed and before we made moves to start packing, most of the houses had been submerged. We had to evacuate the people from their houses. Over 100 houses were submerged by the surge.

“Besides the houses that were submerged, shops and commercial center of the community were not spare by the water from the ocean.

“We want to appeal to the state government and other relevant agencies to immediately come to our aid and give necessary assistance before the surge wipes out the whole community having claimed more than half of the community already.”

A concerned youth in the community, Daramola Authority, told Vanguard that “we have been crying since to successive governments in the state to come to our rescue but no serious interventionist step has been taken to salvage the community from this environmental devastation.

“We are tired of incessant visitation by government officials. What we want is a rescue mission. For instance, if the government can bring badges or tugboats to dredge the Aiyetoro shorelines, it will help a great deal to reduce the aggression of the waves in hitting and chopping the coastline. This will temporarily help to calm the waves, while urgent and speedy works on the actual embankment are ongoing. It is unfortunate that the Aiyetoro Shoreline Protection Project had been awarded twice and abandoned.

On the excuse of the dearth of sand for the sand-filling, Daramola said: “Such complains are erroneous because there are heaps of sand at Araromi offshore (Araromi is a neighbouring community to Aiyetoro) and also, there are other heaps of dunes at a community called Iloro (an inland community close to Igbokoda, the headquarters of Ilaje LGA).

Enikuomehin said: “Lagos State had similar challenges at the Bar Beach and it was rescued when the Federal and state governments took over the challenge, but they are not interested because their pecuniary interests are not protected. Within the space of six months, the land can be saved if the government shows commitment and the willingness.”

On his part, the lawmaker representing Ilaje and Ese-Odo federal constituency, Mr. Kolade Akinjo called the attention of President Muhammadu Buhari and governor Rotimi Akeredolu to the plight of the community.

“We cannot afford to play politics as leaders and concerned stakeholders with the lives of our people. We must wake up to the challenges facing us as a people and make an honest break of it or we get swamped by this recurring rise in sea level caused by global warming and oil exploration as happening right now in Ayetoro community.”

But the traditional ruler of the community, the Ogeloyinbo of Aiyetoro Community, Oba Micah Olaseni Ajijo, said that the NNDC Aiyetoro Shore Protection project had been abandoned and one of the projects undergoing forensic review.

Oba Ajijo, who said that properties destroyed last Saturday include homes, pubic buildings and cottage industries worth about N2bn.

The traditional ruler said he had informed the Commissioner for Environment in the state that “the World Bank-financed design study and the one by Minister of Environment be subjected to environmental sustainability and climate resilience checks before a final decision is made.”

Help is on the way, says NDDC

Meanwhile, Chairman of the House of Representatives Committee on NDDC, Mr. Olubunmi Tunji-Ojo has assured that the Commission would approach the natural disaster with a more drastic measure.

Tunji-Ojo said: “It’s quite saddening that our people have had to suffer in the past years of an occurrence that could have been better managed.

“As stakeholders in the development of the Niger Delta region, we will not fold our arms while things remain the way they have always been. It is time for a drastic approach to be put in place to manage this ugly incident.

“In the coming days, I will engage the management of NDDC on what can urgently be done to salvage the situation.”

The solution is beyond govt, NDDC- Ondo govt

When contacted, the Environment Commissioner, Mr. Funso Esan said that the state government was disturbed by the perennial sea surge.

Esan, however, expressed concern and sympathy to those who were affected by the ocean surge in Ayetoro Community

Esan said: “The state government has written to the Ministry of Humanitarian for relief materials for the displaced people.”