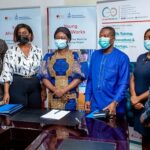 The National Board for Small Scale Industries (NBSSI) has signed Memoranda of Understanding (MoU) with four organisations to seal their collaboration on the “NBSSI/Mastercard Foundation Young Africa Works” project.

The organisations comprising  Shehub, Association of Ghana Industries (AGI), Ghana Tech Lab and Intelligent Capital , have for months been  supporting the  execution of the GH¢70 million project which aims to provide employment and income opportunities for 39,000 youth including 70 per cent women.

Signed in Accra on Wednesday, the MoU are expected to boost the collaboration between the partners to help achieve the overall goal of the three- year project which was launched in June this year.

The Executive Director of the NBSSI, Mrs Kosi Yankey-Ayeh; Director of Intelligent Capital, Leticia Browne ; Chief Executive Officer of AGI, Seth Twum-Akwaboah and Erica Kyere of (Shehub) and  Daniel Owusu of Ghana Tech Lab) signed the pact on behalf of their  institutions.

According to Mrs Yankey-Ayeh, the collaboration was key in realising the development agenda of the country through entrepreneurship and job creation opportunities.

”At this point, the quality of the work, respect for timelines and value for money and commitment to work are just few things I want to bring to the attention of the partners. The success of the project does depend largely upon the quality of their support. We will expect nothing but the best,” she said.

Amidst the upheavals ongoing  across the world due to the COVID-19 pandemic, she said, the NBSSI had trained 1,763 apprentices of which 528 had been graduated and given start-up kits  under the Apprenticeship to Entrepreneurs (A2E) component of the project.

Similarly, she said the Board had organised 104 bootcamp trainings across 54 districts for 5,440 participants and 3,636 beneficiaries had gone through incubation under the Innovation, Creativity and Entrepreneurship (ICE ) component of the project

Under the Micro-Small-and-Medium-Scale-Enterprises Business Acceleration (MBA) part of the project, she said 3,022 youth had been trained to realise their dreams.

“NBSSI through its efforts have established over 13,600 new businesses and created over 11,200 jobs, and we are aware that a lot more needs to be done”, she said.

Mrs Yankey-Ayeh said all these had been done over the last few years because most of the youth were engaging in businesses and needed a lot of support to survive.

“Through this programme the NBSSI and the Mastercard Foundation will continue to support even businesses that were established out of necessity to access market opportunities and make them become meaningful businesses with high growth potential”, she said.

She thanked the Mastercard Foundation and other partners for the project which had complemented the government’s job creation effort to fill in gaps and opportunities for those who wish to start their businesses.

The representatives of the four organisations , in separate remarks, stated their commitment to help achieve the objectives of the project.