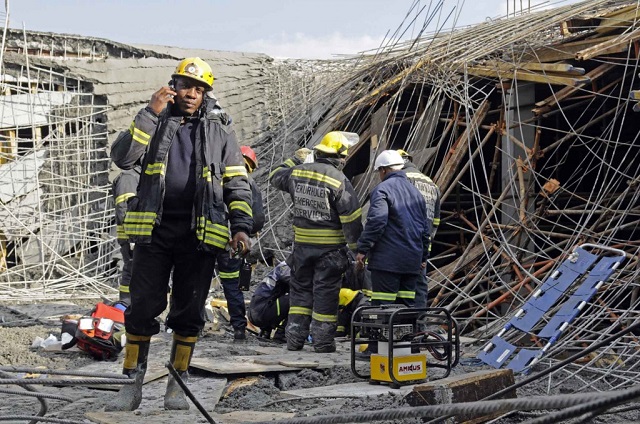 Kampala, Uganda | THE INDEPENDENT | The National Building Review Board-NBRB has tasked city authorities to institute committees to oversee the construction of buildings in their areas.

During a sensitization meeting for Masaka city officials and leaders, Milton Fred Ocen, a member from the NBRB said no new buildings will be allowed to be constructed within urban centers without a building permit.

The building permit will be issued by the building committee after conducting a technical assessment to ensure that all regulations ranging from the class of the building to the capacity of the construction companies are followed by the developers.

He says that the move is aimed at popularizing and enforcing the Building Control Act 2013 after realizing increasing cases of accidents at construction sites where buildings collapse and kill people because of flouting the regulations.

Ocen says that the building committee that will comprise political leaders and technical staff will be reviewing the applications from developers and assess them before approving the construction by issuing building permits that will be attached to the building plan.

He says the building committee can revoke the permit if it realizes that the developer has deviated from the approved plan and building regulations.

He has advised city council authorities to identify and recruit a building control officer to provide technical advice to the building committee.

Jerome Olowo Stowell, the board architect says the building committee will re-inspect the building after construction for issuance of an occupancy permit, adding that no building will be allowed to be occupied without a permit.

He says the board has realized that a big number of buildings are collapsing because of substandard materials used and unqualified builders, which he says the new regulations will address.

The Masaka city mayor, Godfrey Kayemba Afaayo has welcomed the development saying that it will be good to involve political leaders who were left out under the old guidelines.

“Previously it has been the work of the technical people to sit and determine which plan to approve and reject. Peoples’ representation has been missing on the decision made but with the formulation of building committees, even the local people’s views will be heard since they will be represented by their leaders on the committee.,” he said.

He however raised concern over the new system of approving building plans which involves going through various processes, saying that it may delay the works.

Francis Ssebula Kyeyune, the Kabonera sub-county LC III chairperson, one of the areas that were annexed to Masaka city, says political leaders should take a lead role in sensitizing their masses about the new building procedures.

He asked the technical staff to give some time to people in new places that were annexed to the city to adapt to the way how things are done in the city.

The post National Building Board moves to fight accidents at construction sites appeared first on The Independent Uganda:.

Police to quarantine new PPC recruits before training in Kabalye