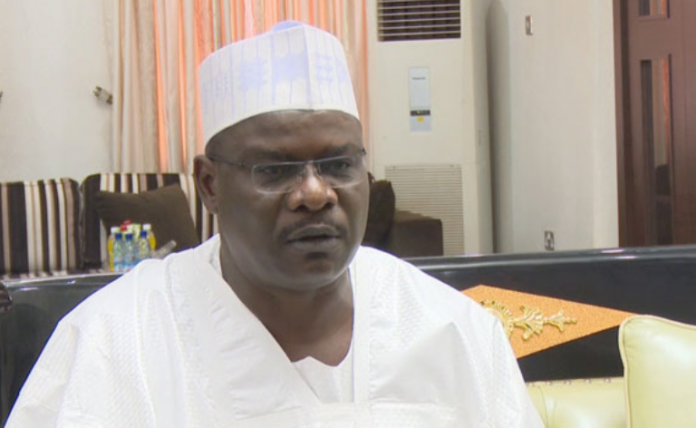 The Chairman, Senate Committee on the Army, Senator Ali Ndume, says he can no longer stand as a guarantor for the former Chairman of the defunct Pension Reform Task Force Team, Abdulrasheed Maina, who is presently facing prosecution.

He said he would direct his legal representatives to start the procedure of terminating the surety bond he contracted for Maina because, according to him, the former pension boss could not be trusted.

This is just as the Federal High Court in Abuja on Friday ordered that Maina should be remanded in custody till the end of his trial.

Maina, who is being prosecuted by the EFCC on N2bn money laundering charges, had jumped bail and fled to the Republic of Niger.

But he was returned to court for the first time on Friday following his extradition to Nigeria earlier on Thursday.

Ndume, who is representing Borno South Senatorial District in the Senate, has stood surety for Maina, his constituent, as the judge had, as part of the bail conditions, demanded among others, that Maina should produce a serving senator as his surety.

Ndume agreed to stand surety for Maina, but the latter jumped bail and escaped from Nigeria.

The judge subsequently remanded Ndume in the Kuje Correctional Centre following his inability to produce Maina when the case came up for hearing.

A legal battle ensued, and Ndume was left off the hook while Maina, the fugitive, was arrested in the Niger Republic and extradited to Nigeria on Thursday.

Reacting to the development in an interview with journalists in Abuja on Friday, Ndume commended the Inspector-General of Police (Mohammed Adamu) and other security personnel that were involved in the arrest and extradition of Maina.

He said, “I commend the Nigeria Police Force for executing the bench warrant issued on Maina by the Federal High Court in Abuja.

“With the successful arrest, extradition and subsequent remand of Maina at the Kuje Correctional Centre, I will proceed to direct my legal team to begin the process of withdrawing my suretyship for Maina with immediate effect because his action has shown that he is not trustworthy.”

Ndume said in an interview with Punch, “Considering the circumstances I found myself at that time, I have no regrets standing surety for him, but it is not fair to always ask a serving senator to stand surety for every high profile personality accused of a crime, who hails from his constituency.

“I stood surety for Maina because the bail condition stated that only a serving senator could bail him. Because his offence was bailable and he is constitutionally considered innocent until convicted by the court and as a politically exposed person, my hands were tied, but now that he jumped bail, my hand is now free.”