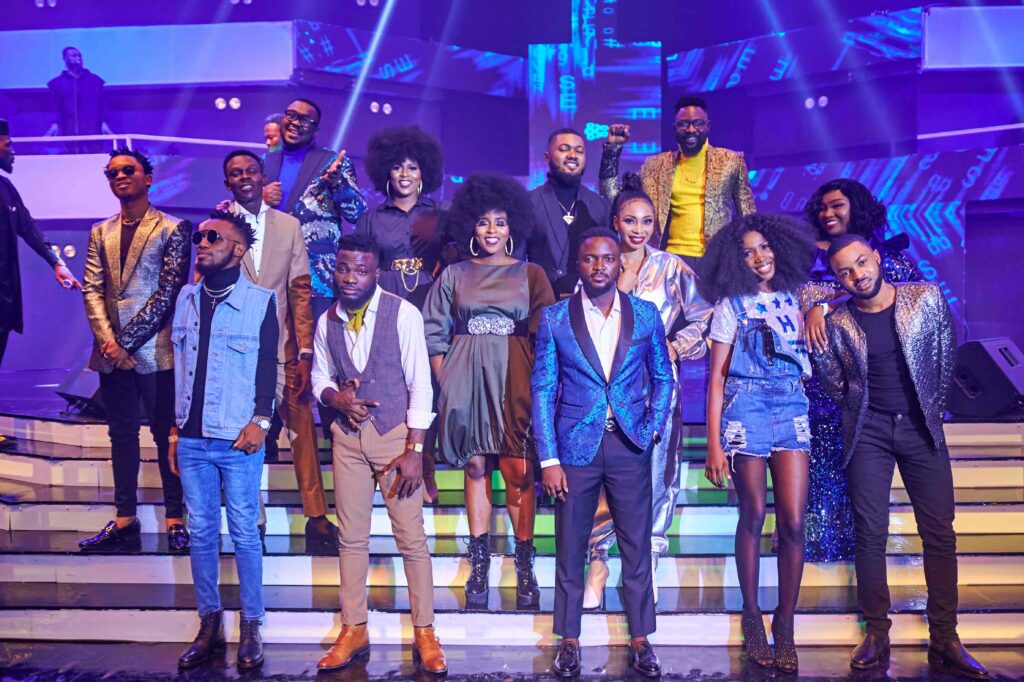 Last weekend, MTN Y’ello Star viewers watched as 14 finalists displayed their vocal strengths and performance abilities as they performed to determine who would be the first to lose their right of performance on the show.

At the end of Sunday’s outing, the sixth episode of the show’s debut season, five of the 14 contestants, who are at the bottom of the leaderboard after scoring the lowest cumulative points, are up for exclusion from live performance.

Week 3 kicked off with highlife and folk music performances from the finalists with each performance rated within the range of 10. Jesse Drumz performed first singing “Time Na Money” by Mike Okri. At the end of his performance, Banky W, one of 3 judges on the show expressed delight at his improvement saying he was “starting to come into his own”.

Asides watching the contestants put in some work to keep themselves in the show, performances from episode 5 proved to be a journey down memory lane as contestants performed Nigerian classics from various decades from the 70s to the 2010s. Rael scored the lowest for the highlife performances as her rendition of Onyeka Onwenu’s “You and I” didn’t impress the judges enough to get her a score better than 4.3.

For Sunday’s episode 6, the contestants performed a mix of pop and RnB hits by Aretha Franklin, John Legend, Alicia Keys, Rihanna and Seal. The top performance of the day was Freeborn’s powerful delivery of Aretha Franklin’s “You Make Me Feel Like a Natural Woman”, which earned her a 19.6 rating, as the judges ranked contestants on a scale of 0 to 20.

Rael once again got the lowest rating, as her performance of Alicia Keys’ Empire State of Mind earned her an 11.3 rating. Guest judge, Olisa Adibua criticized her song choice, stating that though she had fun performing it, she could have picked a better-suited song.

Gideon’s performance was a highlight of the night as all the judges rated him an 18, a huge rise from his highlife performance that only got a 6.7 on the 10 scale. Jesse Drumz, the visually impaired finalist also brought some flair to his performance playing the drums for his rendition of Harry Styles’ Watermelon Sugar. He joined Uzezi and the duo of Oiza and Meyi on the shortlist of contestants who played an instrument during their performance.

Banky W used the judges chat session as an opportunity to remind the contestants that talent is never enough in the music industry, it takes more than that to succeed. “If you are talented and entitled and not willing to push yourself and get the other things you need to complete that picture; you will never make it.”

Voting ends on Wednesday evening after which the excluded contestant would be announced at the next gala, which airs every weekend on stations across the country. The excluded contestants will lose their right to perform at the live shows but will remain in the Y’ello Hub to continue their musical education delivered by acclaimed faculty members.