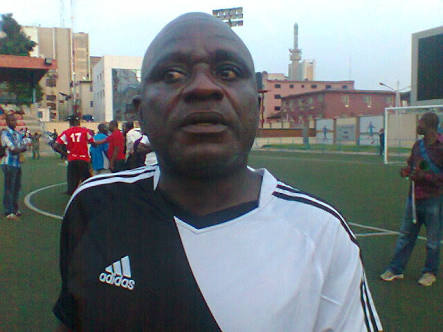 Moses Kpakor’s debut for Nigeria in 1990 saw him wearing jersey number 6 which was supposed to be retired in memory of Sam Okwaraji who died adorning that jersey number in 1989.

The significance of that number did not mean much to the BCC Lion until our Columnist, Emeka Obasi, put it to him recently.

Kpakor is a delight to interview. He is also a trained teacher, from a family of footballers. President Ibrahim Babangida offered him a special handshake for demobilizing Algerian captain, Rabah Madjer, in the grand finale of the Algeria ’90 African Nations Cup which the hosts won.

Your Eagles debut was January 25, 1990, against Cote D’Ivoire at the Tafawa Balewa Stadium, Bauchi. How did you feel?

Of course, you are correct. It was my first international cap. We won 2-0 in that ECOWAS Cup game, with goals from Tajudeen Oyekanmi and Okechukwu Uche. I felt so delighted and fulfilled that I had finally achieved my 10-year dream of playing for Nigeria.

I made it public in 1980 that I wanted to play for the Green Eagles and suddenly here was Moses wearing the green-white-green shirt. I also felt very proud of the coaches that showed me the right mentality to become a great player: Sir Cephas Iorhemen Akpoo, Christopher Aloo, Moses Ajala, Mudashiru Ademola, James Suleiman Peters, Shaibu Amodu, Charles Bassey and Femi Ojo. These coaches were important tools to my soccer success and I will forever remain grateful.

You wore jersey number 6 in the game which ended 2-0 against the Elephants. That number was supposed to be retired after Sam Okwaraji died wearing it less than six months earlier. Did that create some discomfort?

Frankly, it didn’t occur to me that Sam Okwaraji ever wore jersey number 6 for Nigeria. It was not in my mind at all. If I had known, for sure, I could have won dreadlocks to show my appreciation for his brief contribution to the Super Eagles. May his soul continue to rest in peace.

Nigeria eventually won the ECOWAS Cup after Senegalese coach, Lamine Dieng, gifted it to the Eagles because the Teranga Lions could not play in the dark since there were no floodlights. That must have been a pleasant surprise or was it not?

Absolutely, we were very shocked including his players who felt it was a game within their reach to make name for themselves.

Thereafter, the new Eagles packaged by Clemens Westerhof flew to Algiers to pick a Nations Cup silver. How did you manage that experience?

The experience was very motivating, from home to Amsterdam where we had good preparations. We beat some amateur teams: Ajax reserve team 2-1 with goals from Daniel Amokachi and Emma Okocha, PSV reserves 2-0 with Samson Siasia and Rashidi Yekini scoring before we wrapped off our camping whipping a local team Westervot 7-0.

We arrived Algiers in high hopes and enthusiasm. We wanted to surpass the performance of out predecessors who finished second at Maroc ’88.

However, in our very first game, disaster befell us as we were massacred 5-1 by Algeria but because we had a very good coach who read the game well, we bounced back gradually and wow, we were in the final. That was after dismissing Cote D’Ivoire, Egypt 1-0 each and Zambia 2-0 in the second semi-final, thanks to Uche and Yekini. Ten years earlier at Libya’ 82, Zambia battered Nigeria 3-0.

We were all happy we made that record. Back home, Eagles were red-carpeted at Dodan Barracks and General Ibrahim Babangida was very proud of our performance. What pleased me was when the president asked after the defender that marked out Rabah Madjer and I was asked to step forward to have a presidential handshake which has remained my most memorable recognition till date.

The year 1990 was good. You also won the African Winners Cup with BCC Lions. Did it sound like magic?

Yeah,1990 was like magic indeed. Winning the AFCON silver and clinching the African Winners Cup with BCC Lions as well as the FA Cup third place.

After caging Madjer in Algiers, you did the same to Abedi Pele of Ghana in Kumasi during a Senegal ’92 Nations Cup qualifier. I interviewed Abedi in Dakar and the Black Stars captain said he was match-rusty that was why you had your way. Do you agree?

That was an excuse to shy away from my superb ability to mark out deadly players like him. He made noise to come to Lagos for the return leg, to prove me wrong. I trained more than before waiting for Abedi but he didn’t show up. I had always trusted my marking.

You scored three goals in the 1990 Winners Cup. Two of them were scored away. Do you remember?

Yeah. My first Winners Cup goal was April 15, 1990, in Lome, Togo against Entente Deux in the return leg. It ended at 1-1. My second was in Dakar on September 9, against US Ouakam of Senegal in the quarter-finals. We won 1-0. My third came on November 4, against Grupo Deportivo of Mozambique at the National Stadium, Surulere-Lagos. We won 6-1. Humprey Jebba bagged a brace, Luis Igwilo, Clifford Cassidy and Benedict Ugwu were the other scorers.

During the cup defence in 1991, Moses and Terfa Kpakor played against Al Madina, Libya in the second round. In the latter stages both of you were not regulars. What happened?

Sure. On May 24, 1991, we drew 0-0 with Al Madina at away after winning the first leg 3-0 with goals from Cassidy and Igwilo. Remember, Terfa had moved to Obanta United, Ijebu Ode. Of course, we returned from Libya and played home against ACB, Lagos. It ended 2-2. I scored both goals for BCC. Then on June 15, a great tragedy befell me at the Dan Anyiam Stadium, Owerri when I broke my right lower limb against Iwuanyanwu National. I know BCC overcame Dynamos of Zimbabwe before edging out Entente Setif of Algeria, I think on October 5 with Jebba’s lone goal. The second leg in Algiers on October 18 saw John Zaki giving us an early lead before we were forced to a 1-1 draw.

ALSO READ: US lawmakers to vote on marijuana legalization

Tell us about the three Kpakor brothers and their father, all footballers.

Joseph Kwaghgba Kpakor ( first child) was followed by Terfa and then Moses. Joseph and Terfa were already household names in Benue football with the Oklegendary Kwande United, Adikpo. Our father played football so I like to simply say football in our family is genetic. No better explanation than this.

Nevertheless, as the younger ones see the older ones playing, it builds up their interest also and somehow, they too end up kicking the round leather. If it’s boxing then the younger ones start wearing boxing gloves, you know. Our fourth and tenth born also played. The tenth played for Junior BCC Lions and Hilltop Obudu before he became ill.

You lost Terfa. Amir Angwe, who started from Adikpo like you, also departed so did Alimin Aule. You must have been devastated.

Terribly devastated because here were the gladiators of modern Benue football going one after the other and what sense does it make to those of us left behind? Especially where nothing is done to immortalise them. You are stinking worried that’s the same direction when God calls you. What else should I say? Only weep for my own death now.

You played in six Challenge Cup finals with three different teams and won five times. You must still be celebrating.

Pick your most memorable game. And your worst?

I have played too many good and bad matches in my life. It’s difficult to single out. Let’s say 1990 Afcon grand finale because that was the game Nigerians voted as my best so who are my to oppose their opinion? Otherwise, I would go for Abiola Babes versus Esperance of Tunisia in Lagos. This was first leg semis of the 1987 African Winners Cup. We won 1-0 and I scored from 25 metres. My worst was a professional league encounter between Insurance and BCC at Ogbe Stadium, Benin. BCC lost 4-0. I was surprised Shaibu Amodu kept me in for 90 minutes. A very poor and ugly outing it was.

One of your little boys is now captain of the Kenyan Under 15 soccer team. How did you groom him?

This boy is the son of Manz Denga, a very successful young man and banker. His father introduced me to him as a good coach who also played for Nigeria. Immediately, the kid wanted to know from me how he too will become a great player. I gave him some inspiring words to always memorise. Within their house, I did some skills with the ball and asked him to practice even when he returned to Kenya.

This boy is super brilliant, so I told the father. I encouraged the boy that he will play for Nigeria someday. I am telling you of a two-day encounter with this super kid. He was less than six years, that was in 2011. I am not surprised. The father told me a week ago that the boy is playing for Kenya.

Sorry about the passage of your wife. Was it football that won you over?

Thanks for your sincere condolences. I appreciate greatly, sir. Football won me good things, yes, including my late wife.

You are back to your first profession, teaching. What does the future hold for Super Eagles and the Nigerian League?

I don’t know. I do not hope any more that it will get better than it is now. You do not even trust the administrators. You see, while we were still playing, they kept saying they wanted our calendar to meet up with European standards. It’s more than two and half decades today. We have not seen anything close to meeting up with Europe. Hehehe, shameful indeed. There will be hope only when we make legislation that will make us run football as private companies like the La Liga and English Premier League.

Why will Atiku Abubakar, Aliko Dangote, Femi Otedola, Mike Adenuga and other billionaire businessmen not finance local club football here as business to maximize profit? They can build their stadia, clubhouses, training camps, good transport system and more. Why will they not team up to establish a type of cable TV that will be showing our league matches to the outside world?

Also, why will our league not have the best hands running it, from the federation to the League board and coaching at the club level? We must remove politics and favouritism at all levels. This can be achieved when football is privatised and teams become public liability companies. If the government still wants to own clubs, their clubs must play to the rules. We all know many things owned by the government do not work efficiently until they are privatised. Why not football or sports generally? Only then will we have a league that will be entertaining once again, highly competitive, financially lucrative and can produce quality players for our national soccer team.

Thank you for your time.