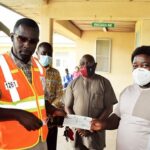 One of the 15 victims of last Wednesday’s fire outbreak at the Mighty Gas filling station in Ho has died.

Selorm Dogbatse, a taxi driver from Matse, believed to be about 40, passed on at the Ho Teaching Hospital (HTH) on Saturday, at about 10am.

Fourteen of the victims, who include two women are in serious conditions at the HTU.

According to Dr Nelson Affram, Head of Surgery of the facility, the patients suffered between 57 per cent and more than 90 per cent burns, and also suffered severe inhalation burns, as a result of which they are breathing with difficulty.

Meanwhile, one the victims is on admission at the 7 Medical Reception Station at the 66 Artillery Regiment, in Ho.

According to Afram, one of the women has been taken to the intensive care unit of the HTH.

He disclosed these yesterday when a team from the National Disaster Management Organisation (NADMO) visited some of the patients in the wards.

The team, led by the Regional Director of the organisation, Mr Divine Bosson presented a cheque for GHc 2000 to the hospital authorities in support of the upkeep of the patients.

Earlier, Dr John Tampori, Chief Executive Officer of the HTH, said that the fire outbreak at the filling station adjacent the hospital highlighted the need for a burns and plastic reconstruction unit the facility.

“This required support from the public,” he added.

We will deliver credible polls on December 7 – EC assures