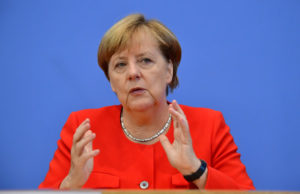 Merkel meets with the state premiers via Video links on Monday to discuss the national coronavirus situation.

Merkel is to met with the representatives of Germany’s 16 states to assess the effectiveness of the country’s current partial shutdown.

The leaders were set to consider whether schools in Germany can remain open and if current contract restrictions should be further tightened, sources close to the talks told DPA.

According to a draft proposal seen children and young people are to be encouraged to meet with only one particular friend regularly in their free time.

Similarly, families are to limit private get-togethers to their own household and people from one other particular household.

READ ALSO: GERMANY: Merkel plans to take in around 1,500 migrants from Greek islands

The proposal further envisions limiting peoples’ meetings in public to members of their own households and a maximum of two people from another household.

The draft calls for private parties to initially be avoided completely until Christmas.

Since Nov. 2, only members of two households have been allowed to meet in public, with not more than 10 people taking part in the gathering.

The proposal also calls for people who display cold symptoms especially runny noses and coughs to immediately quarantine at home.

The draft also pushes for social distancing measures to be stepped up at schools. Masks that cover the mouth and nose are to become compulsory for teachers and pupils of all ages on school premises and during lessons.

Pupils are to have lessons in assigned, unchanging groups of about half the regular class size, according to the draft proposal.

At-risk groups including the elderly and sick people are to receive special FFP2 masks at reduced prices subsidized by the federal government.

Case numbers have continued to rise in Germany two weeks into the shutdown, which has included the closures of restaurants, bars, museums, and other leisure facilities, while retail remains open.

Given that daily case numbers have remained high, hopes for a relaxing of measures will likely be dashed in Monday’s talks in favor of the stricter measures.

On Saturday, Merkel had warned that the virus would continue to dominate people’s lives for a long time. “The coming winter will make heavy demands of us all,’’ Merkel said in her weekly podcast.

Looking ahead to the meeting, Bavarian premier Markus Soeder on Saturday said there would be no relaxation of the rules until at least the end of the month, and he would not rule out the possibility of restrictions being further tightened or extended into December.

“Whether the shutdown has to be extended possible, we’ll see. Whether more needs to be done – that will all be decided,’’ he said.

Thousands of people took to the streets in several German cities over the weekend to protest against the coronavirus restrictions.

Merkel is also set to meet regional leaders on Nov.23, to discuss whether measures will have to be tightened or can be partially eased before Christmas.

Wike vows to sustain safe environment for investors in Rivers