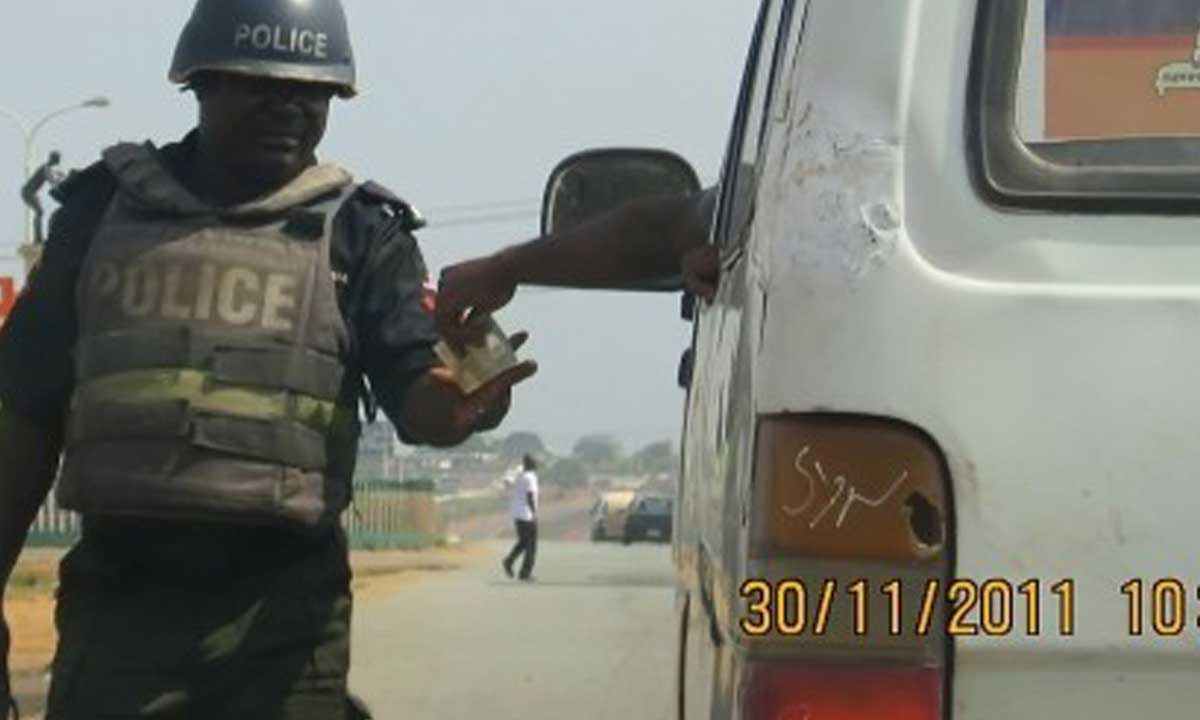 A Twitter user who simply goes by the name, Femi and whose handle is @3eyedpixel, has alleged that men of the Nigeria Police Force extorted N100, 000 from him on Thursday.

The man, who shared his experience on the social media platform, said his only crime was having a laptop with him.

He said the police officers requested that he should pay N500, 000 or go with them to the station and that he had to negotiate with the officers to accept N100, 000 as he needed to get to his destination on time.

He tweeted, “Earlier today, officers of @PoliceNG robbed me of N100, 000 in the presence of my wife. My only crime was having my official laptop with me. They couldn’t pin any crime on me so they insisted I follow them to their station or pay N500, 000. I was running late for my flight, so I had to be diplomatic with them. We had a lot of back and forth and I finally had to settle for N100,000 (payment for being a Nigerian).

“I know nothing will be done, but I’m just putting my story out here for people to know our fight is far from over. For the sake of transparency, I will drop details about the event, including payment methods and receipts. I also want to categorically state that I was very cooperative and engaging. My communication was totally aimed at de-escalation.”

Femi said he is a software engineer in the Netherlands who had come to Nigeria for the Christmas holiday and was running late for his flight, which caused him to negotiate to give the officers N100, 000.

“First of all, I’m a software engineer previously with @Andela and now with @BrightComputing in Netherlands. I am not a Yahoo boy (Internet fraudster) and I will never be one. I only came home for Christmas and was returning to my base and I know better than to let Nigerian police delay me.

“When the police stopped us at 7/8 bus stop, they first accused my wife and me of not wearing face masks. Indeed, we didn’t, but that was only because we were in a rush. I explained this and even showed them a pack of masks and a bottle of sanitiser.”

He said the police checked his luggage and saw two laptops and requested for his company’s ID, which he did not have.

He however said he showed them his residential permit to prove he had come in from the Netherlands.

“I explained to them that my company does not issue ID since it’s almost irrelevant. However, I showed them my NL residential permit as a proof that I live and work over there. It was at this point that they stopped talking and got into the Bolt ride with me. Then two others got into their rickety ‘korope’ (mini bus) and we followed.

“After about 300m, we drove into a street opposite Ajao Estate junction and drove for about 150m. All the while, they were asking me to pay N500, 000. I told them I needed to catch a flight but my words fell on deaf ears. They kept yelling and at a point stopped my ride and asked me to get in their bus. On a good day, I would drag (get confrontational) with the police but I didn’t have the luxury of time – so I had to find a solution quick. We started negotiating my release. I went as low as N50, 000 but they would rather bundle me in their bus than take a measly N50k.”

He said the policemen, after several appeals, agreed to collect N100, 000 after which he was taken on a bike to an ATM where he withdrew money for them.

Femi said immediately the policemen got the money, they became friendly though he could not identify the officers.