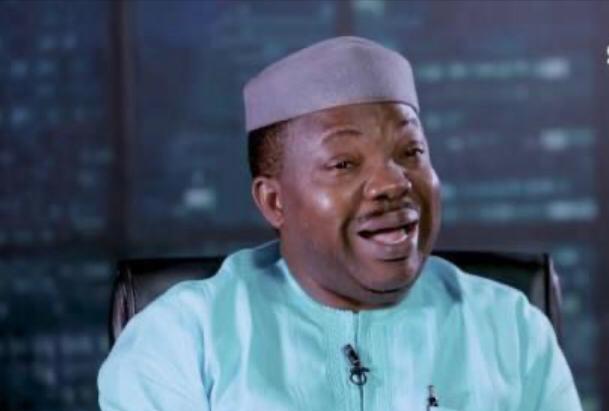 At the main gate of the popular Omole Estate, Ojodu, Lagos hung a portrait of the frontline human rights activist, Yinka Odumakin, confirming the news of his sudden death at 59 last Wednesday.

At the Odumakins’ residence inside the estate, also hanging at the entrance was an upright banner bearing the picture of the late Afenifere spokesman, clutching communication tools: books, a diary and a pen, which had become part and parcel of him until that black Saturday of April 3 when he passed on to eternal glory.

Sympathizers trooped in and were ushered into the modestly furnished living room of the Odumakins where they condoled with the widow, Joe Okei, and other family members.

One of the sympathizers, Professor Wole Soyinka, a Nobel laureate, did not hide his mood.

Speechless, he merely waved to journalists who had accosted him for a word on the deceased’s activist as he (Soyinka) sauntered into the Odumakins’ residence.

Soyinka left after speaking with the widow and family members.

Other eminent Nigerians who had visited the bereaved family as of that Wednesday include the National Leader of All Progressives Congress, APC, Asiwaju Ahmed Bola Tinubu; a former Speaker of the House of Representatives, Mr Dimeji Bankole; former Governors Ibikunle Amosun and Gbenga Daniel of Ogun State; Are Onakakanfo of Yorubaland, Gani Adams; and Mr Bisi Olatilo.

Also at the Odumakins’ house was a delegation from Vanguard Media Limited where the deceased wrote a weekly column.

Olasukanmi Adeleye, a Program Officer at Women Arise for Change Initiative, an NGO founded by Joe Okei, shared his relationship with the deceased with Sunday Vanguard.

He wept profusely as he spoke.

Saying he is married to the younger sister of Joe Okei, Adeleye described the late activist as his “brother, father, mentor, benefactor, everything”.

Recalling the origin of their relationship which, according to him, started in a meeting with Yinka at his office about 12 years ago, he explained that the deceased welcomed him as if they had known each other before, pointing out that he (Yinka) didn’t know how to segregate, tell lies or hide something.

Struggling to describe the late spokesperson for Afenifere, the Program Manager said he was his benefactor and a friend of the people.

Adeleye pointed out that the preoccupation of the late activist and wife was to ensure that the masses get the best welfare, adding that they would go out of their way to satisfy other people.

“No one went to them crying went back home crying”, he stated, stressing that they would inconvenient themselves to satisfy people seeking for assistance.

On Yinka’s religious life, he said that even with his busy schedule, he did not joke with anything pertaining to God, noting that his best song was “I have confidence in you Jesus”, a song he tried to sing but broke down again in tears.

Adeleye noted that the late activist loved his family and as such created enough time for them, irrespective of his busy schedule.

Gbenga Ganzallo, the Head of Secretariat at Women Arise, said it was difficult for him to talk about the late activist in past tense.

Ganzallo described Yinka as a wonderful person, stating that he was interviewed by the deceased before he joined Women Arise years ago.

He noted that he learnt what true leadership means from the deceased whom he said followed his heart in all he did.

“He was a man of conviction. Whenever he was convinced about a cause, he followed it; he hated deviation”, he said.

The Secretariat Head said Yinka cherished good governance more than his other things, explaining that he loved a plural society where there is justice.

“He always said that he wanted to see Nigeria as a plural society where nobody is humiliated and where justice reigns”, Ganzallo stated.

He explained that Yinka liked team work and that even when he wrote a communiqué in Afenifere and other groups he belonged to, he wouldn’t sign it single-handedly because he wouldn’t like to take the credit alone.

An in-law, Emmanuel Okei, also spoke to Sunday Vanguard about the late Odumakin. Okei, 40, recalled that he joined the Odumakin family when he was in JSS3 and, today, he is the General Manager of one of the family’s organizations, Petals Media.

He described his late in-law as a simple but result oriented person who believed in ability to deliver.

Emmanuel recalled how the late Afenifere spokesman called him from his sick bed to correct an error on a program of the Yoruba Agenda “I was printing it shortly before his death”.

He further said that the death still appeared to him as a dream and that he wept every time he realized that it was not a dream but a reality.

Driver of the late activist, Wasiu Akande, who said he had been with his late boss for 17 years, described Yinka as a very courageous man whom many approached for counseling.

Akande noted that many who lived even 100 years and above did not do half of what his deceased employer did for the country and the Yoruba race.

He recounted how Yinka and his wife, Joe Okei, supported him to procure a piece of land and how he (Yinka) always encouraged him to save, adding that his master liked showing people how to make money and achieve their legitimate aims.

Describing his late boss as a good man, the driver narrated how the deceased once called a state governor to address an issue affecting an aide’s community which was brought to his attention.

He said he would always remember his departed master as someone who taught him hard work and noted that he was always ready to work and attributed that to the reason he was always called upon by many.

An activist, Comrade Aghodo Kehinde Stephen, who also spoke to Sunday Vanguard at the Odumakins’ residence, said he was still shocked about the sudden death of his boss Yinka whom he described as a brother and mentor.

Stephen recalled his first meeting with the deceased and his wife in Ojota, Lagos in 2012 when the couple led the protest against fuel subsidy removal.

He revealed that he always feared for the safety of his boss as an activist particularly during the military era and regretted that the deceased passed on when his attention was needed most.

Stephen said he will never forget how the late Afenifere spokesman encouraged youths to remain resolute at Ojota even when they got information that security forces had been sent to attack them.

Oluwakemi Johnson, a sympathizer who also spoke to Sunday Vanguard, described the deceased as a man of his words who fought for justice. Johnson said his relationship with Yinka spanned over three decades, pointing out that his friend restored many lives by teaching them how to fish and not just giving them fish. Describing the deceased as a voice of the voiceless, he said he was aware that his friend had lung issues and that when he learnt about his being put in intensive care unit in hospital, the only option opened to him was to pray fervently, which they did, only to hear that he had passed on.

Security agents in Coast region called on to be vigilant

3 lessons I have learnt from the demise of Maina Olwenya