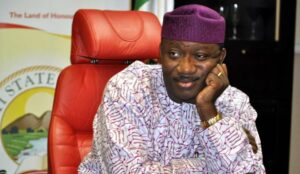 A Civil Society Organisation (CSO) under the aegis of Reformers of Africa’, has emphasized the importance of accountability and transparency in governance.

It group said enduring and meaningful development can only be attained if leaders are held accountable by the citizens of the country.

The group said this remains the only panacea to the dwindling fortunes of dividends of democracy in the African continent, especially in Nigeria that was widely adjudged and rated as the ‘Giant of Africa’.

The group said these in Ado Ekiti, over the weekend during a virtual launching of a Social Accountability Programme under the banner ‘#JKF Watch’.

According to the Founder and Team Lead of the CSO, Mr Ayomide Alao, the ‘JKF Watch’, which stands for John Kayode Fayemi Watch, was conceptualised by the group to track and monitor the compliance of Governor Fayemi’s administration to the implementation of the promises made to Ekiti citizens in 2018.

Alao said the tracking programme, which had been launched in Lagos and Oyo States, was initiated to make the government responsible and enlighten the citizens on how to rate the performances of government at all levels.

He said: “This tracking policy is meant to make our governments more accountable. Though we are dealing with trackable policies, but time has come for us to ensure that our governments deliver on their promises. They must not make empty or white elephant promises to deceive the people.

“Our feeling is that the government and the governed must see themselves as partners. Government must stop imposing policies on the people. The people must be seen as more of co-producers of policies; that is how democracy runs the world over.

“There must be a synergy between the government and the people. Our elected officials must honour and respect the contracts signed with the citizens during electioneering and that informed this tracking policy of our group.

“This is not intended to pit the people against anybody or government, but to ensure that the right things are done so that our government and politics can work effectively for the people”.

Speaking further, Alao stated that the group has studied the five-pillar policy thrust of Fayemi’s administration, to know the promises made and the extent of implementation on the field.

READ ALSO: Appointment of rectors: You have breached your own law, ASUP tells FG

“We are getting information from government agencies on measurable and specified projects being executed in the areas of water provision, education, road Infrastructures, human capital development, agriculture, health and other sectors”.

Alao, however, added that encumbrances like low funding, legislative and judicial actions that can hinder the execution of a certain project contained in the leader’s promissory note are always put into consideration before coming up with a report.

The Group’s Head of Programme, Mr Temilorun Olanipekun, maintained that it has become imperative to design a tracking policy of this fashion to redirect the slow pace of development in the country to salvage the fragile democracy from total collapse.

Olanipekun, an Oxford University Scholar, stated that “the mission and vision is to promote participatory democracy in the African clime, bring out innovations in youths and leaders to influence social and political change.

“It is just right for our people to demand good governance, through open and transparent tracking process to rescue our nation from leadership deficit”.

Olanipekun assured that the group has a focus which was to make government responsible and wouldn’t compromise or renege on the set goals by political or governmental interferences.