The Ministry of Information has put its Nation Building Updates (NBU) series on hold in honour of late former President Jerry John Rawlings.

According to the statement, the decision to pause the bi-weekly NBU series was in compliance with President Nana Akufo-Addo’s directive for a seven days of national mourning in honour of Mr Rawlings who died on Thursday, November 16, 2020, at the Korle Bu Teaching Hospital in Accra.

Below is the statement 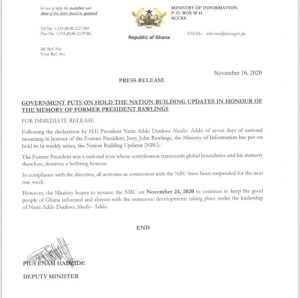 Curbing HIV/AIDS is a shared responsibility