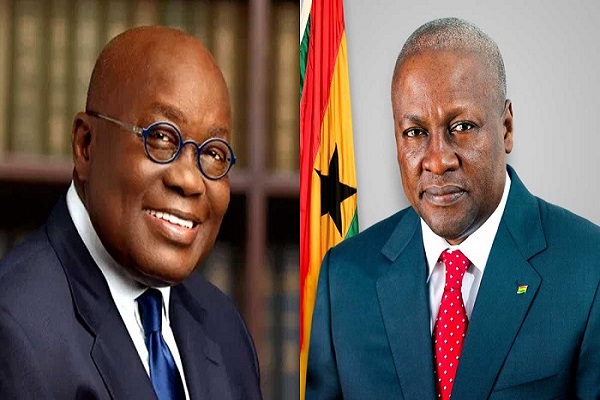 Similar pacts were signed by candidates in the 2012 and the 2016 elections to commit themselves to working together to tackle electoral violence, impunity and injustice.

The 2020 PEPP was also in response to the violence in the Ayawaso West Wuogon Constituency in January last year, after which President Akufo-Addo, the NPP and the NDC demonstrated political leadership and concerted action to tackle the menace of vigilante violence in Ghana.

The event is being convened by the country’s National Chief Imam, the NPC, the National House of Chiefs and the Institute for Democratic Governance (IDEG).

The election is dubbed the “battle of two giants between the incumbent, Akufo-Addo and his predecessor Mahama.

It is the third time Akufo-Addo and Mahama will competing against each other for the highest office, with each previously having won one poll – Akufo-Addo in 2016 and Mahama in 2012.

Although 12 candidates are vying for the presidency, including two women, only Akufo-Addo and Mahama are said to have a chance of coming out victorious.

It was earlier rumoured that the widow of Ghana’s first president Jerry Rawlings was withdrawing from the contest.

In the wake of ex-president Rawlings’ death on November 12, an Accra-based radio station linked to the NDP alleged that the last-minute decision is linked to the demise of Konadu’s husband, who died two weeks ago.

But, the NDP had dismissed that rumour.

According to Ghana’s Electoral Commission Chairperson, Mrs. Jean Mensa, 17,027,641 persons are expected to take part in this year’s general election.

According to Mrs. Mensa, the voters’ register, together with all the other lists, were presented to all the political parties on November 7.

The Electoral Commission said 21,887 persons will not be allowed to vote on Election Day.

The electoral commission has started deploying electoral materials as the Upper East Regional Directorate of the Electoral Commission (EC) has taken its delivery for the presidential and parliamentary polls.

The materials, which included ballot papers, ballot bags, Biometric Verification Devices and others, were received in the presence of officials of the EC, the Ghana Police Service and political parties.

The materials are been kept at the Regional Police Headquarters, where political parties were allowed to put their padlocks on the door.

This was after an initial objection by EC officials.

The Regional Research and Elections Officer of the New Patriotic Party (NPP), Alhaji Amadu Mogtar, in an interview, said the materials were counted and it was up to the number and were all sealed and serial numbers were intact.

He said for previous elections, particularly in the Upper East Region, materials were usually kept in the said building.

Mogtar confirmed that the various political parties were allowed to also use their padlocks to lock up the building.

But marking his 62nd birthday in Tamale at the weekend, Mahama expressed his readiness to accept the outcome of the December polls.

He said: “I wish all Ghanaians the best and I feel blessed to be alive and in very good health at 62. I wish that everybody had a healthy and long life as we look forward to peaceful elections. The will of God should prevail in whoever He decides on to lead this nation for the next four years. He should let the person prevail in the election.”

Mahama spoke at the Children’s Ward of the Tamale Teaching Hospital (TTH), where he had cut a birthday cake and interacted with patients and staff as part of activities marking his birthday.

The NDC candidate, accompanied by his wife, Mrs. Lordina, also visited the Nyohini Children’s Home in the Tamale metropolis, where he donated bags of rice and groceries to support the upkeep of the children.

He pledged his commitment to peaceful elections and assured the people and the international community of the desire of the party for a transparent electoral process.

Mahama appealed to voters to bring the NDC back to power to continue with its people-centred projects to improve their lives.

“It is my hope and prayer that the people of this area will stand behind the NDC and vote it back to power to continue with its good works,” he added.

We will continue to demonstrate till Letsa is changed – Volta group