The Ministry of Foreign Affairs and Regional Integration has commissioned a passport application centre for the Central Region.

Deputy Minister of Foreign Affairs and Regional Integration Ministry, Charles Owiredu, commissioned the office on Friday, November 20, 2020 on behalf of the Foreign Minister.

Speaking at the commissioning ceremony in Cape Coast, Mr Owiredu said the opening of the Cape Coast Passport Application Centre (PAC) formed part of Government’s efforts to expand the scope of passport operations in the country.

“This brings the
current number of PACs to thirteen (13) across the country,” he said.

“Also, preparations are underway for the establishment of additional PACs in Bolgatanga, Upper East Region and in the six (6) newly created regions and by the end of 2021.”

” This is in line with government policy of bringing passport services to the door step of Ghanaians and it ample demonstration of government’s commitment to good governance through decentralisation and de-concentration of essential public services,” he said. 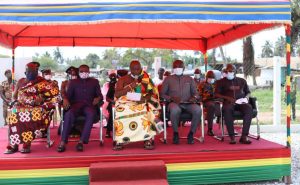 He stated that the Ministry of Foreign Affairs and Regional Integration has leveraged the boundless limits of technology to enhance the efficiency of passport operations in general for improved service delivery.

Accordingly, he added, the ministry adopted government’s digitization agenda by automating the process of acquiring passports through the online application system.

“The new system process ensures orderliness at the PACs since they will only attend to applicants whose appointments are due for processing,” he said.

“Flexibility and transparency in service delivery are additional benefits of the online application system.
With the official opening of this Centre, residents of this Region can now apply for passport here in Cape Coast without travelling to Takoradi or Accra for such service.”

“Therefore, citizens of Cape Coast and its environs from today will enjoy the fruits of passport operations at their door step and its associated benefits which were hitherto absent from this beautiful and vibrant region.”

“It is also envisaged that the establishment of a Passport Application Centre in Cape Coast would unleash more opportunities in the supply chain where the youth and school leavers can take advantage and set up their own small businesses.”