The Minister of Foreign Affairs and Regional Integration, Shirley Ayorkor Botchwey, commissioned the expanded works on the Consular Section of Ghana’s Mission in Berlin, Germany.

The commissioning was done virtually on Wednesday, November 18, 2020, due to Coronavirus restrictions.

Delivering a virtual speech, Madam Botchwey said plans for expanding the Consular Section of the Mission have been in the pipeline since November, 2016.

She stated that it was refreshing to see the completion and handing over of the project within eight months of its commencement in February, 2020.

“As you all know, it became pertinent to carry out extension works on the existing consular building to accommodate the growing demand for consular services by Ghanaian migrants, mostly from Libya and Italy,” she said.

According to her, an equally important consideration was the need to upgrade the security fixtures at the premises.

The project which was funded with Internally Generated Funds (IGF) of the Mission, she stated, was a feat worth commending and ought to be emulated by Ghana Missions abroad.

The facility is a two-storey building with a 20-seater capacity conference room, modern ICT installations and enhanced security systems.

According to the minister, The above facilities will enhance the Mission’s capacity to provide reliable consular services to members of the Ghanaian community in Germany and any other person who will have need of the services of the Consular Section. 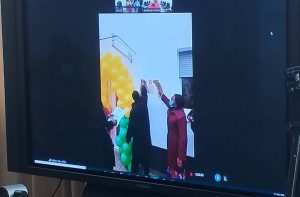 ​
​The expansion of the Consular Section of the Berlin Mission, she explained, was also in line with efforts by the Government of Ghana to improve infrastructure at Ghana Missions abroad.

“It is for this reason that Government obtained the US$50 million Société Générale Credit Facility, which is being used to acquire new properties and improve existing state-owned properties abroad,” she stated.

She congratulated the veteran journalist and Head of Mission, Ambassador Gina Ama Blay, staff of the Berlin Mission and the Contractors for the successful completion of the project.

She stated that the Government of President Nana Akufo-Addo “remains committed to addressing the infrastructure needs of our Missions abroad.”

She therefore urged “the staff of the Embassy to reciprocate the investment that Government has made in their welfare, through the provision of this conducive working environment. You owe it a duty to step up your diplomatic activities to boost the relations between Ghana and Germany as Government attaches great importance to Ghana-German relations.”

In her opening remarks, Ambassador Blay said she assumed office in 2017, she observed that one of the important steps needed to be undertaken to project the Mission in a positive light was to give the consular section a facelift.

“Today, I am elated, that the consular section of the second largest diplomatic Mission of Ghana in Europe, has witnessed an expansion which saw a two-storey modern structure being constructed to, among others, accommodate passport applicants and offer other consular services. The new structure also has additional offices and ancillary facilities such as a meeting room which could serve as the office of the Deputy Head of Mission and some selected staff,” she stated.

“This new building furnished with state-of-the-art equipment, is an expression of the sustained efforts and commitment of the Government of Ghana to provide timely delivery of passport services to our compatriots in Germany as well as facilitate speedier consular service delivery, and provide greater convenience and comfort to the general public at large,” she said.

“Furthermore, I believe the project symbolizes the solid and growing relationship between Ghana and Germany,” according to her.

In a related development, the Foreign Minister has commissioned a new Chancery for the Permanent Mission of Ghana in Geneva, Switzerland.