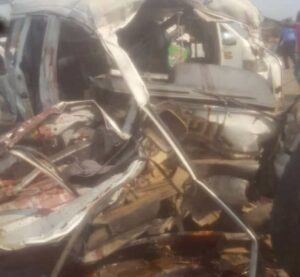 An accident involving a Mazda bus and a low bed truck has reportedly recorded five fatalities and injured 16 others, in Ogun State.

The incident was said to have occurred at about 3 pm, at Danliti, Mowe area, along Lagos/Ibadan Expressway, when the truck was making a U-Turn.

The casualties were fifteen adults and a toddler while the fatalities were the driver of the bus, his conductor and three other occupants of the bus.

The incident was said to have caused traffic gridlock in the axis which lasted for hours as many road users were stranded.

The adult victims were said to be taken to Users Private Hospital while a toddler was taken to Olabisi Onabanjo Teaching Hospital (OOUTH) for medical attention.

Also, the presumed dead were taken to Idera Private Morgue.

According to eyewitnesses’ account, both vehicles were inbound Lagos, when in an attempt by the low bed truck to make a U-turn at Danliti, the Mazda bus, which was coming from behind rammed into the truck due to reckless driving, fatigue and loss of control.

The impact of the accident led to the death of five passengers in the bus, (four males and a female) on the spot while 15 passengers were injured (14 adults and a toddler).

However, it could not be ascertained if the dead female victim was the mother of the toddler.

The accident vehicles have been towed to Mowe Divisional Police Station.

TRACE Spokesperson Babatunde Akinbiyi who confirmed the incident to Vanguard has commiserated with the family if the affected families victims.

He urged drivers to desist from reckless and excessive speed, and ensure they have adequate rest before embarking on any journey because of its attendant consequences.