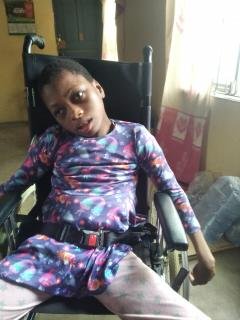 A father of an 11-year old Oyinkansola Esther, Dr. Olusoji Oyeranmi, is appealing to the Oyo State governor, Mr. Seyi Makinde and the entire public for financial assistance for his only daughter who has been suffering from the traumatic complications of cerebral palsy for over a decade, to seek proper medical treatment in Germany.

Oyinkansola, who was born in April 2009, according to her father, has undergone several medical follow up clinic visit and physiotherapy at the University College Hospital (UCH), Ibadan.

During an interview with Vanguard on Monday, Oyinkansola’s father narrated that: “The tortuous agony actually started on April 11, 2009, when Oyinkansola was delivered at the Jericho Nursing home, Ibadan, Nigeria. After a prolonged labour, the doctors on duty delivered the baby through CS (operations).”

“At this juncture, I dared to ask of the doctors, if it will not be necessary to give the baby thorough and special attention. My curiosity was borne out of the fact that after the delivery and minor cleansing; the baby was just wrapped with clothes and then put her on the bed with a very old lantern by her side.”

“The response I got from the doctor was that the baby was 100 percent okay. However, I got the shock of my life when about three days later, the nurses on the afternoon shift called my attention to the malfunctioning of Oyinkansola’s left arm.”

“Meanwhile, before the discovery, she had been crying incessantly and nobody could just proffer a solution as the condition of the mother (my wife) still remain critical at the period. And in order to save the child, the family was advised to take Oyinkansola to Oni Memorial Hospital, Ibadan.”

“But what actually dampened the family’s spirit was the horrible discovery at about fourth visit to Oni and Sons children hospital for a medical checkup for the baby. The physiotherapist in the hospital ordered an x-ray of the left arm. After about a week, when the baby was taken back to the hospital for the dressing of the wounds inflicted on her during the first earlier treatment.”

“It was discovered our baby’s left arm had been infected by a deadly virus after so many pains and wounds she suffered for more than two weeks.”

“To rescue Oyinkansola from the trauma of a permanent disability, I decided to take her to the University College Hospital (UCH), Ibadan, where she was diagnosed of cerebral palsy in 2010. Ever since then, we have been moving in and out of hospitals and the family has been undergoing this trauma for over a decade now, adding that, there was no single specialist who could handle her type of cerebral palsy in Nigeria.

“Oyinkansola is currently 11 years, yet she cannot sit or stand independently and can’t speak despite her frequency to UCH over the years,” Dr. Oyeranmi groaned.

According to him, after a series of communications with foreign hospitals, he was invited by a German doctor, Dr. Micheal Weber to his medical facilities in Germany.

Oyinkansola was expected to receive autologous stem therapy with laser activation. This he said, to be very useful in the treatment of many musculoskeletal disorders and has a great role in the treatment of cerebral palsy without any adverse effects.

“The total amount required is 20,000 Euros (approximately 8.4 million Naira) which covers the cost of treatment, flight, and accommodation in Germany.”

“Your Excellency, I need to mention here that our family could not afford this huge amount required for this life-transforming medical trip to Germany due to our current extreme financial difficulties.”

“I seek the financial support of our compassionate Governor towards saving the life of my only child,” he pleaded with Governor Makinde.