Verdict:False. The case challenging Rawlings’ nationality in 1992 was brought against him by politician John Bilson. The lawyer for John Bilson was Mr. Obeng Manu. There is no evidence that Nana Akufo-Addo is linked to the case.

An activist of the National Democratic Congress (NDC), Dzifa Gunu made a post on Facebook on Saturday, November 14, 2020 indicating that Ghana’s president, Nana Akufo-Addo in the year 1992, dragged Former President Jerry John Rawlings to court to challenge his Ghanaian nationality.

“In 1992 Akufo-Addo took JJ to court saying that he (JJ) was not Ghanaian. J J suffered,” the post reads.

The post has attracted more than 800 reactions on his wall and has been shared in various groups as well. 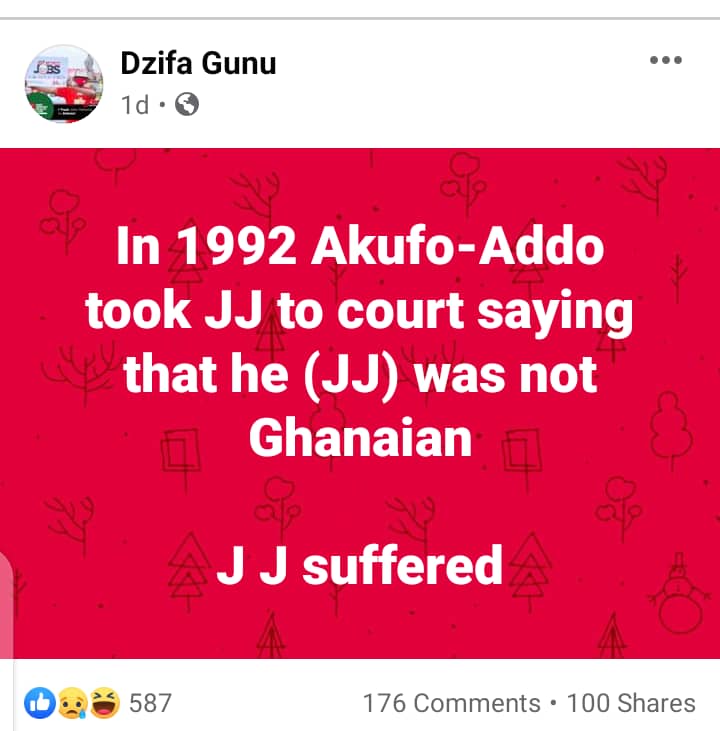 The lawsuit brought against Jerry John Rawlings to challenge his nationality in 1992 was a major issue in Ghana’s recent history receiving both local and international coverage. The Independent UK, on Friday 9 October 1992 reported the news. The publication named one John Bilson as the man that challenged Rawlings’ nationality.

A book titled,”The politics of government-business relations in Ghana, 1982-2008” on page 107 confirmed John Bilson as the one to have challenged Rawlings’ nationality in court.

The book described Dr. Bilson as the leader of a political party, theThird Force Party, which contested and lost in the 1979 elections.

Records show that he initiated the process in an attempt to stop Rawlings from contesting in the 1992 elections; Ghana’s first democratic elections in the Fourth Republic.

Judy.legal, a website that has archived several court records in Ghana online has a copy of the judgement on the case.

1). “To restrain the first defendant-respondent herein from holding himself out and/or campaigning on any platform or at any public forum as presidential candidate of the National Democratic Congress (NDC) in any part of Ghana pending the hearing and final determination of the suit.

Dr. John Bilson’s position was that Rawlings as at the age of 21 years, was of dual nationality. He said Rawlings owed allegiance to the Republic of Ghana and the United Kingdom but had not renounced his UK citizenship hence is a non-Ghanaian based on sections 1 and 8 of the Ghana Nationality Act, 1971 (Act 361).

He said by virtue of this, Rawlings did not qualify to contest in the elections.

But the court, presided over by Justice Essilfie Bondzie among other things noted in his judgement that:

I take a judicial notice of the fact that until September 1992 the first defendant was a member of the Ghana Armed Forces. Also as head of state he is the commander-in-chief of the Ghana Armed Forces. He had been a member of two governments of the Republic of Ghana. Currently, he is the head of state of Ghana. It is therefore to be expected that in these capacities he had on several occasions sworn allegiance to the Republic of Ghana. So that even if on attaining the age of 21 then he had dual citizenship (which is not admitted) the irresistible inference which this court draws from the oaths of allegiance he took on these several occasions, is that the first defendant does not owe allegiance to any foreign government. This must be so especially as he is still the head of state and a member of the Government of the Republic of Ghana.”

Rawlings was consequently cleared to contest in the polls which he won with 58.3%.

Per the document, the counsel in the case were:

Was Akufo-Addo connected to the case?

President Akufo-Addo was not mentioned in the official record as being either the plaintiff or counsel for any of the parties involved.

While it is possible that there may have been supporting counsel, there is no record of President Akufo-Addo being one.

Records show that by 1992 when the case was filed in court, Nana Akufo-Addo had already established his own law firm, Akufo-Addo, Prempeh& Co.

The reporter, Jonas Nyabor, produced this fact-check under the auspices of the Dubawa 2020 Fellowship in partnership with Citinewsroom to facilitate the ethos of “truth” in journalism and to enhance media literacy in the country.

The post Fact-check: False! Akufo-Addo did not challenge Rawlings’ Ghanaian nationality in court in 1992 appeared first on Citinewsroom – Comprehensive News in Ghana.