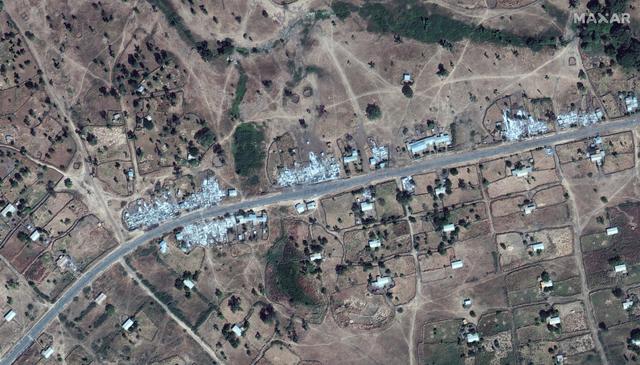 An overview of destroyed buildings near Dansha airport in Dansha, Ethiopia, is seen in this satellite image taken November 18, 2020 and supplied by Maxar Technologies.

The Government of Ethiopia has denied that it was into talks on how to end the conflict in the Northern Tigray region of the country as hostilities heighten.

This comes as the African Union on Friday night named former Presidents Joaquim Chissano of Mozambique, Ellen Johnson-Sirleaf of Liberia and Kgalema Motlanthe of South Africa as special envoys to help restore normalcy in the country.

An overview of destroyed buildings near Dansha airport in Dansha, Ethiopia, is seen in this satellite image taken November 18, 2020 and supplied by Maxar Technologies.

Ethiopian troops are currently advancing to the Tigrayan capital, Mekelle, despite resistance from regional forces, who have used bulldozers to plough up roads and are putting up resistance

Hundreds, possibly thousands of people, have been killed, more than 30,000 refugees have fled into Sudan and Tigrayan Forces have fired rockets at Ethiopia’s Amhara region and the neighbouring Eritrea.

The AU had said, “The primary task of the Special Envoys is to engage all sides to the conflict with a view to ending hostilities, creating conditions for an inclusive national dialogue to resolve all issues that led to the conflict, and restoring peace and stability to Ethiopia.”

Ethiopia on Saturday, however, said it will not engage in talks with the Tigray People’s Liberation Front.

The government’s task force on Tigray tweeted, “News circulating that the envoys will be travelling to Ethiopia to mediate between the Federal Government and TPLF’s criminal element is fake.”