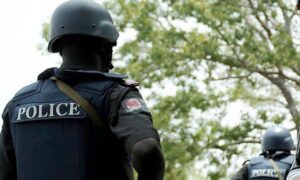 A man identified as Kenneth Onuoha on Thursday narrated at the sitting of the Abia State Panel on Police brutality, extrajudicial and related matters, how a Police Sergeant, Collins Apugo, attached to the Ehimiri Police Station, Umuahia, shot dead his brother, Chukwubuikem Onuoha, as they were returning to their residence after a meeting.

He told the panel that Sergeant Apugo shot Chukwubikem twice on the chest, leaving him in a pool of blood where he died.

Kenneth explained that the Police Sergeant had shot at them but the deceased pushed him (Kenneth) out of the way while the bullet hit him on the chest.

He disclosed that efforts to assist the deceased get medical attention were made difficult by the police officer who threatened to shoot anyone that comes close.

In his words; “When I tried helping the deceased, Sergeant Apugo threatened that anybody that comes close will be shot.

“Chukwubikem kept moving and shouting and Sergeant Collins shot him directly at his chest the second time and ran away.

He added that Chukwubuikem was later taken to the Federal Medical Centre, FMC, Umuahia where he kept shouting “Sergeant Collins has killed me” until he died.

He further disclosed that when the report of the incident was lodged at the Umuahia police station, the Divisional Police Officer advised the family to bury the deceased since they ‘already knew who killed him.’

A warrant of arrest was later published declaring Sergeant Apugo wanted by the Police while his rifle was recovered at his hometown in Isuikwuato LGA.

The Police Sergeant has not been seen till date even after the deceased was buried on October 17, 2019, in Umuahia.