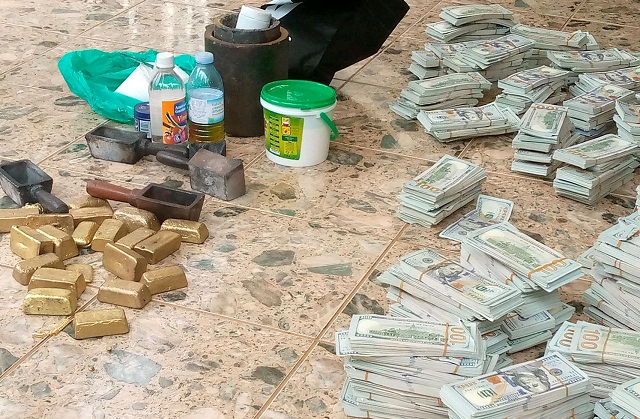 Suspects were found with counterfeit currency notes worth US$ 2.4 M

Kampala, Uganda | THE INDEPENDENT | At least eight people have been arrested in a predawn raid by the Uganda Police Force on a property in Munyonyo, a Kampala suburb targeting dealers in counterfeit currency and fake gold.

Charles Twine, the spokesperson of the Criminal Investigations Directorate-CID says the suspects were found with counterfeit currency notes worth US$ 2.4 M, about Shillings 9 billion that was ready for circulation in Uganda and abroad.

According to Twine, suspects are mostly foreigners from the Democratic Republic of Congo-DRC (5), Cameroon, 2 Nigerians and 1 Ugandan. The Congolese came to Uganda as refugees. During the operation, police also recovered brass rods, powder and fake gold and different oils.

The development comes days after a joint security team comprising the police, the military and intelligence organs arrested Lt. Enoch Katwesigye Kyebijunga, a retired UPDF soldier in a gold scam that saw an American National lose over US$ 3.5m, close to Shillings 13 billion.

He was charged for money laundering together with city lawyer Simon Peter Musangala and Martin Bwayo, a police officer. During investigations, detectives discovered that fraudsters were claiming to be representing top army generals in the gold deals. Cases of fake gold deals have been on the rise in recent years. Investigators say such scams threaten the country’s gold business.

“Through the inter-agency, we got information that there was part of their previous case of Katwesigye and his group of three that we arrested and charged in court. They have been operating under the disguise of a company called Kings-way Uganda Limited purportedly a clearing agent,” said Twine. He says they found the company very relevant to the previous cases.

He said that police stations and CID offices have received very many cases of people who have been conned with the counterfeits. He said the operations dubbed “Manya Wokoma” literally meaning “know where to stop” will continue.

According to the Bank of Uganda, it will even become more important in the year ahead. Uganda earned UGX 590 billion from gold exports in June 2020.