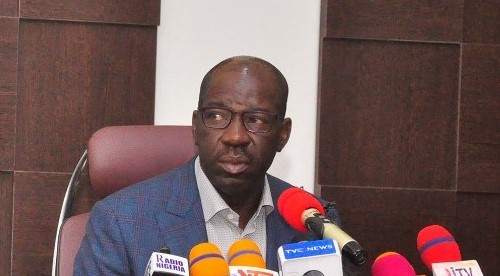 The Edo State Government has purchased 25 hectares of land to build a correctional facility.

Governor of the state, Godwin Obaseki, made the disclosure on Sunday during a thanksgiving service at the Government House in Benin, the capital.

Obaseki added that 725 vacancies had been declared in the state, The Nation reports.

He said, “About 725 vacancies have been declared. Within a month, the recruitment of a new generation of professionals will commence in earnest. By early next year, we would have completed the process.

“We will commence intensive training early next year for 30 to 45 days, by which time most vacancies would have been filled in the public service.

“After this, we will announce political appointments and get political actors to join us to begin to work on our manifesto to fulfil our promises to Edo people.

“Work starts on Monday. We have announced the appointment of Secretary to the State Government (Osarodion Ogie).

“We are expanding the transition team and they have 60 days added to the initial timeline to complete all aspects of their work.

“Together, we will design a new security scheme. We cannot wait for one central policing system to take care of the policing needs of Edo people.

“We have already graduated the first batch of 877 of the 2000 community constables that have been trained by the Nigeria Police Force.

“They would be deployed in various communities to work with local community arrangements to ensure effective coordination and keep criminals out of the state.”