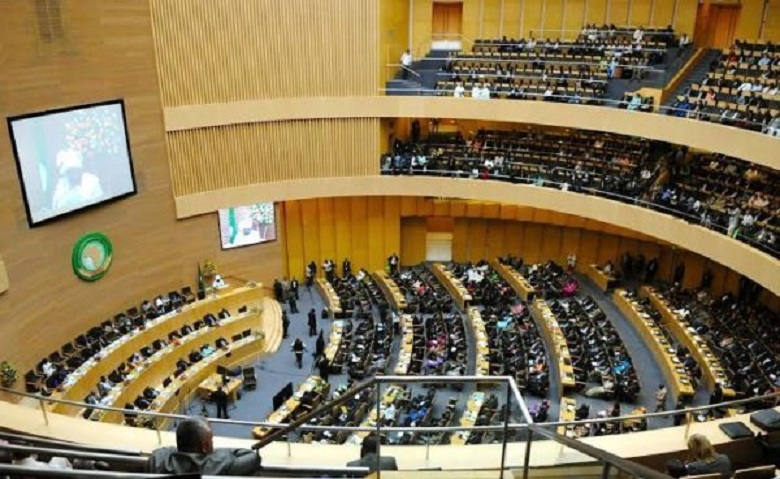 The Economic Community of West African States (ECOWAS) was created in 1975 by the Treaty of Lagos (ECOWAS Treaty). The creation of an ECOWAS Parliament came almost 20 years later, when it was formed alongside other Community institutions with the revision of the ECOWAS Treaty in 1993.

Established by Article 13 of the ECOWAS Revised Treaty, the Community Parliament was established with a mandate to provide advice to the Community on a variety of integration issues, ranging from respect for human rights and fundamental freedoms, through public health policies and interconnection of telecommunication and energy networks, to youth and sports, among other things.

It took a further six years before the first legislature of the Community Parliament was officially inaugurated in Bamako (Mali) in November 2000.

The Parliament is composed of one hundred and fifteen (115) seats. Each Member State has a guaranteed minimum of five seats. The remaining forty seats are shared on the basis of population.

As noted earlier, the First Legislature of the parliament was inaugurated in Bamako, Mali with a five-year mandate (16 November 2000 to 5 October 2005). Professor Ali Nouhoum Diallo was elected the first Speaker. That same year, the Authority of Heads of State and Government directed the ECOWAS Commission and Parliament to present proposals on the enhancement of Parliament’s powers, in the hope that the next legislature would be the last one with only an advisory capacity.

ALSO READ: #EndSARS: We’re not after DJ Switch, but unhappy with Sanwo-Olu ― Army

Following the restructuring of ECOWAS Institutions by the Authority of Heads of State and Government in 2006, in which the life span of the Legislature was reduced to four years, the Second Legislature was inaugurated on 11 November 2006, under the leadership of Mahamane Ousmane from the Republic of Niger. The Legislature lasted until 10th November, 2010.

This legislature formed an ad hoc committee to work on proposals of parliamentary restructuring including study visits to other regional Parliaments, such as the East Africa Legislative Assembly (EALA), which is one of the few regional parliaments in Africa with legislative powers, and the European Parliament. Though reports and recommendations were made on the enhancement process, the term of the second legislature ended without their implementation.

The Third Legislature was inaugurated on 8 August 2011 with Ike Ekweremadu from Nigeria as the Speaker of Parliament. This legislature immediately set up an ad hoc committee to – once more – work on enhancing its powers. After one year of work, the committee submitted a Draft Supplementary Act (DSA) to the Plenary, which it proposed would replace all preceding legislation governing the Community Parliament.

Ekweremadu during his tenure advocated that Parliament needed to move to a higher status and called on the ECOWAS Authority of Heads of State and Government to accelerate the processes of making the Community’s Parliament a full-blown legislative institution.

“The end of democracy should be development for the Community and better life for our people through good governance,” he said upon his election.

Ekweremadu, in his valedictory address said the adoption of the Supplementary Act on the Enhancement of the Powers of the ECOWAS Parliament by the Community Decision Making Bodies remains the most significant achievement of the Third Legislature.

The Fourth Legislature of the ECOWAS Parliament was inaugurated at its first sitting on 4 February 2016. Moustapha Cisse Lo from Senegal, was elected Speaker. The Legislature lasted until 3rd February 2020.

On the 7th of December 2016 the Ministers of Justice of ECOWAS endorsed the draft Supplementary Act on the Enhancement of Powers of the ECOWAS Community Parliament. The Enhancement of Powers Act is meant among others, to permit the ECOWAS Parliament to be involved in the process of budget as well as the oversight of activities of ECOWAS institutions.

Hence, the ECOWAS Parliament is presently undergoing a transition from a merely consultative body, characterized by internal institutional inertia rooted in the lack of decision-making powers, towards a more assertive directly elected Community legislature with a measure of legislative powers.

This fifth and subsisting Legislature of the ECOWAS Parliament was inaugurated during its first sitting on 9th March, 2020 by Issoufou Mahamadou, President of the Republic of Niger and Chairman of the Authority of ECOWAS Heads of State and Government. Sidie Mohamed Tunis of Sierra Leone Elected New Speaker.

Although the current legislature since its birth has been overshadowed by the COVID-19 pandemic, parliament has been active in peaceful democratic processes in Guinea, Côte d’Ivoire and Mali. Also on the table is how to fully maximize the African Continental Free Trade Area (AfCFTA) which the Speaker said holds the promise of prosperity for all Africans amidst the coronavirus pandemic, to the benefit of the economic bloc.

However, one the burdens on Sidie Tunis as the new speaker of the ECOWAS parliament is that ensuring that economic integration envisaged by the founding of ECOWAS comes to reality through free cross-border trade.

A major blow to this ECOWAS dreams is Nigeria’s indefinite closure of its land borders and which halted all trade relations with its neighbours (Benin, Cameroon, Chad, and Niger), in August 2019.

According to President Buhari, the main reason for the closure was to curtail the smuggling of goods such as rice and textiles to boost domestic production. The Nigerian government also aims to curb the illegal supply of weapons into the country. The implications of this border closure are far-reaching—not only for the West Africa sub-region but also for wider regional integration on the continent.

ECOWAS was set up to foster the ideal of collective self-sufficiency for its member states. As a trading union, it is also meant to create a single, large trading bloc through economic cooperation. These are ideals that the new parliament must pursue vigorously.

It is also true that ECOWAS has had historical and more recent experiences with fragility and volatility in the sub-region, including such threats as terrorism, transnational organised crime, piracy, coups, armed conflicts and environmental degradation.

The bloc has intervened in Member States either militarily or through political diplomacy in response to such situations as the military juntas in Guinea and Niger, the attempted coup in Cote d’Ivoire and, the outbreak of armed conflict in Mali. ECOWAS has various Protocols, Resolutions and strategies for dealing with conflict and security matters, including the 1999 Protocol on the Mechanism for conflict management, peace-keeping and security.

Another critical discussion for the parliament has been the idea of a single currency for the region. On June 29, 2019, the leaders of the ECOWAS formally adopted the name of “ECO” for their project of the single currency. The currency was planned to be introduced in 2020.

The fifth legislature made concerted efforts aimed at bringing the ECO- into fruition. Shortly before the pandemic, in an interview with journalists at the Extraordinary Session of the Fourth Legislature of ECOWAS Parliament in Banjul Gambia, a member of Parliament from Liberia, Clarence Massaquoi said: “lawmakers in the Fifth Legislature, will step up on their oversight functions to ensure that member countries meet the convergence criteria for the common currency of the region.”

The idea of a common currency for the West African region which was mooted in the hope of boosting cross border trade and economic development has been postponed several times.

Mr. Massaquoi said the Fourth Legislature did not carry out sufficient follow up as its oversight responsibility, on the implementation of the common currency for the region.

The parliament has been also vocal in its condemnation of external influences over sovereign west African states.

Speaker of the Parliament Mustapha Cisse Lo (as he then was), took a swipe at the French President, Emmanuel Macron for threatening and dictating to the G5 Sahel countries of Niger, Burkina Faso, Mali, Mauritania and Chad over security matters.

He said that “if the Francophone sub-regional countries do not have the right to speak their minds then they are slaves.”

Mustapha Cisse Lo made the remarks while shutting down the 2019 second ordinary session of the ECOWAS Parliament in Abuja, where he urged African leaders to rid themselves the of vestiges of colonialism.

“We should be free to express ourselves. How can Macron threaten our heads of states? That is not independence. Is it the French people who would tell us what we should do for ourselves? I wish was the President of Senegal to tell Macron the truth in the face,” he said.

The parliament also took action to end the crisis associated with herdsmen seasonal migration the region.

During the three days ECOWAS Parliamentary Seminar on Transhumance and Intercommunity conflicts in the ECOWAS Region, held at Monrovia, Liberia in November 2019, parliament agreed on workable plans to that effect.

Stakeholders including national governments, regional organizations like the ECOWAS Commission, Regional and National Legislative Assemblies, Farmer and Livestock Organizations, Private Sector, and Civil Society Organizations were urged to join hands in solving this menace that has engulfed the region.

The Parliament after the three days interactions with resource persons and extensive debate stated that transhumance and the conflict between herdsmen and farmers is a very complex and intricate issue.

They added that the effect has been compounded by the penetration of bandits, criminals, kidnappers and terrorists who have access to small arms and light weapons, which they use to carryout deadly criminal activities, resulting to deaths and property destruction.

In the light of that, parliament urged member states to create budget heads to carter for internally displaced persons (IDPs) and refugees in the region.

International policy analysts, Linda Boré and Felix Henkel writing on the ECOWAS Parliament‘s Rocky Road to Co-Decision observed that ECOWAS is an institution strongly dominated by the Executive arguing that the Community Parliament has to date been unable to counterbalance this power because of its weak mandate.

“One major criticism both from within and outside ECOWAS is that from its birth, the Community Parliament was quite a weak institution and a Parliament only in name because it lacked legislative capacity and, with it, the ability to influence policy. Secondly, the advisory procedure was not mandatory. Hence, Community institutions could choose whether or not to adopt opinions delivered by Parliament,” Boré and Henkel said.

Granted, giving Parliament a greater say maybe a challenging diplomatic endeavour as in the case of the European Union parliament, it nonetheless serves what Immanuel Kant and Alexis de Tocqueville called “self-interest rightly understood”, as it increases the transparency, accountability and legitimacy of the Community Parliament and of ECOWAS as a whole.

A more effective parliament will, in essence, help to address the fundamental challenge in present-day West Africa, namely, to bridge the gap between the people and their institutions.