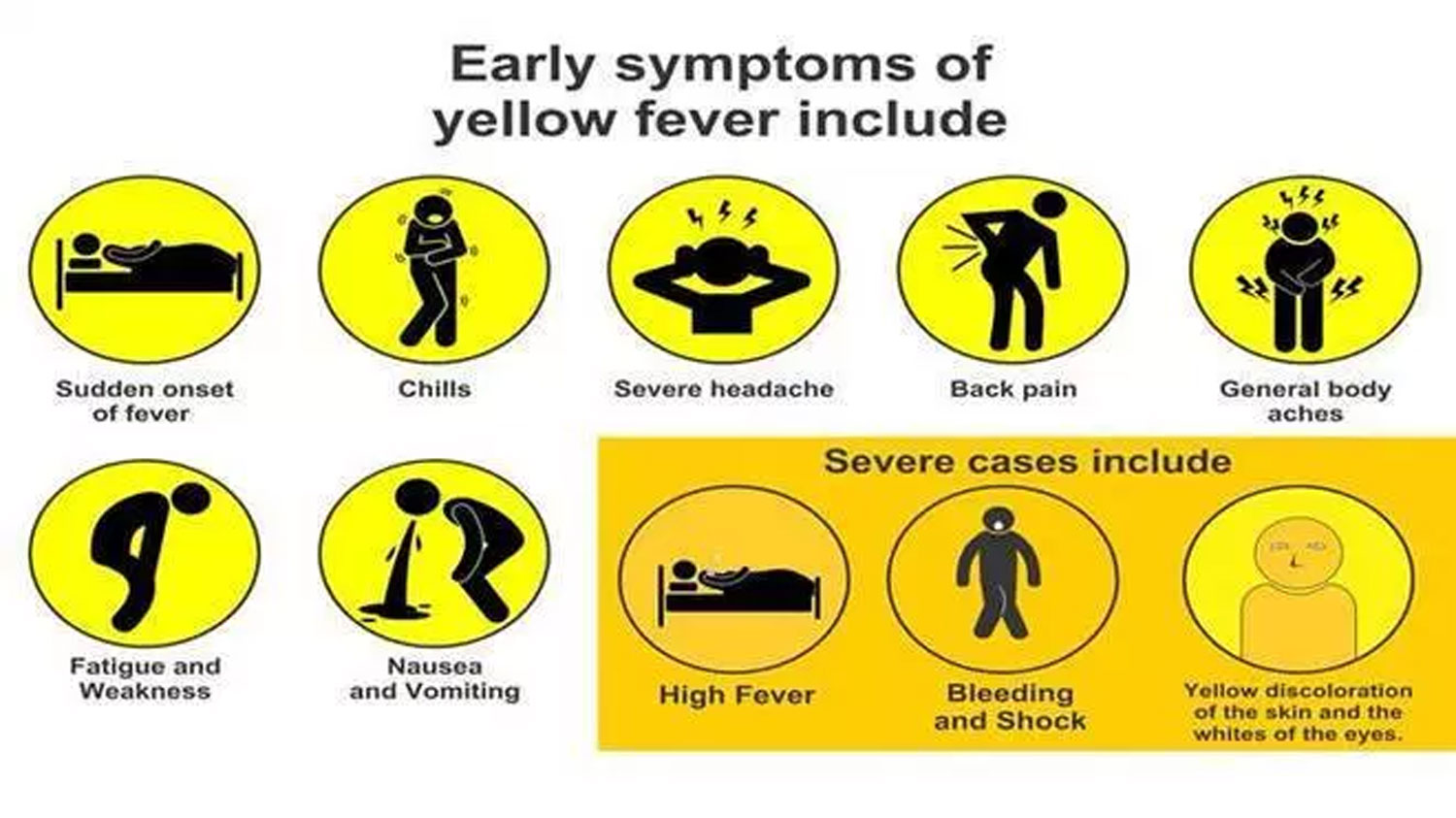 Years after Nigeria reduced the prevalence of Yellow Fever, YF, the disease has ferociously returned and is spreading across the country.

Experts say that if not checked, the fever may spread across the 36 states of the country as Nigeria has a huge population of unvaccinated and unprotected people against the disease.

Nigeria, in past few weeks, has witnessed a re-emergence of YF following laboratory confirmation by the Nigeria Centre of Disease Control, NCDC, of what was initially tagged as “mysterious deaths from strange disease.”

Since then, the trend has continued unabated in more states like Benue apart from Delta and Enugu and Bauchi where it has been confirmed as YF.

According to the Director-General of NCDC, Dr. Chikwe Iheakweazu, as of November 13, 2020, a total of 222 suspected cases, 19 confirmed cases and 76 deaths have been reported in Bauchi, Delta and Enugu.

Most of the deaths occurred before laboratory samples were collected for testing.

The NCDC also revealed that the country has reported a total of eight confirmed cases from seven local government areas, LGAs, across four states with no death among confirmed cases.

READ ALSO: Over 50 die of strange disease in Kogi, Assembly seeks for help

The Weekly Situation Report also explained that on the 1st, 2nd, and 8th of November, clusters of cases and deaths were reported to the NCDC by the state epidemiologists of Delta, Enugu and Bauchi respectively.

74 suspected cases with 35 deaths were also reported in Delta State.

All these occurred between November 1 and 11.

Sunday Vanguard gathered that most of the cases were males, with age ranging from 1-55 years and presented with fever, headache, fatigue, jaundice, abdominal pain, vomiting with or without blood, epistaxis, blood in stools/urine, convulsion and unconsciousness.

Unfortunately, there is no specific treatment for the disease, mostly transmitted by mosquito.

Many health watchers have linked the recent outbreak in Delta, Enugu and Bauchi to poor vaccination.

The disease is transmitted by various mosquito species and primarily affects monkeys in equatorial forests, making it difficult to completely eradicate the disease. It is referred to as “yellow” fever because of jaundice the disease causes in some patients.

Although vaccinations against the disease are nearly 100 per cent effective, Nigeria’s vaccination rate is low.

According to the World Health Organisation, WHO, the major weapons in the fight against YF remain preventive vaccination, and also support for greater preparedness in the most at-risk countries.

WHO has also introduced mass vaccination programmes to combat the disease but, despite the historic role Nigeria played in the discovery of YF vaccine in 1937, the country cannot boast of enough vaccines for its citizens today.

YF virus was the first human virus to be isolated and achieved in makeshift laboratories in Lagos, Nigeria, and Accra Ghana.

The Rockefeller Foundation had established West Africa Yellow Fever Commission in 1925 to research YF and was headquartered in Lagos with a laboratory in Yaba and Accra.

During the research, a survivor, named Asibi, from the small town of Kpeve, Ghana, provided his own blood for the research.

From Asibi’s blood the YF virus, called the “Asibi strain”, was isolated. This marked a historic moment in the fight against the disease.

Reacting to the situation, a renowned virologist, Professor Oyewale Tomori, linked the outbreak in Nigeria to the huge proportion of unprotected and unvaccinated population.

He said more than 100 million Nigerians have no protection against the disease.

“We had a plan in 2012 to conduct a preventive mass YF campaign to cover over a hundred million Nigerians between the ages of nine months and 45 years”, he said. “The plan was to have been completed by 2016 or thereabouts.

“We failed to do that and add to the abysmally low level of YF routine vaccination of our children and you have over 100 million Nigerians unvaccinated, unprotected and at the mercy of Yellow Fever virus”.

According to him, with the situation on ground, Nigeria should expect more cases.

“Expect more cases and do not be fooled, there are probably more YF cases occurring in this country classed under mysterious diseases”

Tomori stressed that YF, caused by Yellow Fever Virus, has been reported in Nigeria since about 1910 during the colonial era.

“We were producing vaccines in Yaba. This is a disease which was the reason The Rockefeller Foundation established the West Africa Yellow Fever Research Laboratory in Yaba in 1925,” he said.

Dismissing the insinuation that Nigeria had eradicated YF in the past, he asked: “Has Nigeria ever eradicated any disease?”

Continuing, Tomori said: “Perhaps, polio may be added to guinea worm. Yellow Fever was reported in 1910 during the colonial era, and it has been off and on up until today.

“If some years are not listed, it is not because there were no YF outbreaks, but our surveillance system and laboratory services were in such a deplorable state that we could not detect or confirm any disease outbreak.”

He said that for more than 50 years, the clamor has been that the country should begin to improve its disease surveillance, upgrade laboratory services, activate and sustain the response.

“States, instead of unashamedly depending on the Federal Government, should live up to their responsibilities, own support and provide funds to run efficient epidemiological divisions at the state level”.

“It is an embarrassment that Nigeria, in 2020, still has to send her YF samples to Dakar for confirmation.

“In fact, embarrassment is too nice a word to describe the situation. It is a national disgrace and shame.

“Of course, the word shame or disgrace cannot be found in our national dictionary.

“Nigeria as a nation should take the issue of disease surveillance with greater seriousness. It is a shame that Nigeria still has to send her samples to Dakar to confirm a Yellow Fever case.”

Tomori explained that the disease cannot be eradicated because the natural hosts for YF are monkeys and other non-human primates.

He added that different species of mosquitoes are needed to transmit YF between man and monkeys.

“Unlike polio, which is transmitted between humans without a vector, you cannot really eradicate YF, you can control it”, the virologist said.

“Eradicating YF will require eradication of any two of the three players in YF transmission – man, monkey, or mosquito. Choose the two you want to eradicate”.

Speaking on the implication of the latest outbreak, Tomori warned that if nothing is done quickly, it would spread to more states and kill more people.

He warned that the outbreak should serve as a warning to Nigerians, who are involved in parading what he called fake Yellow Fever cards without vaccination.

“This recent outbreak should serve as a warning to all those who get fake Yellow Fever cards or get genuine Yellow Cards without taking the vaccine. It is not the card that protects from YF but the vaccine,” he stated.

Throwing light on the outbreak, the NCDC DG, Iheakweazu, recalled that since 2017, Nigeria has recorded clusters of sporadic outbreaks in several states due to the stronger surveillance system and detection capacity in-country.

According to him, YF vaccine was part of the national routine immunisation, which single vaccine provides immunity for life.

Iheakweazu further said the country will continue to record more cases in people who do not receive vaccine.

“We have sent letters of alert to all states to strengthen their surveillance system, ensure suspect cases are identified early and samples are tested,” he pointed out.

He said NCDC is supporting states in the prevention, detection and response to infectious diseases and public health emergencies.

Iheakweazu explained: “When we received the initial report of unknown cases and deaths in the affected states, we deployed NCDC Rapid Response Teams (RRTs) to support the states in investigating and responding.

“Our priority was to identify the causative organism.

“Samples were collected and confirmed as yellow fever at the NCDC National Reference Laboratory.

“Following this, we activated an Emergency Operations Centre for Yellow Fever at NCDC and the affected states for coordination.

“Our RRTs are working with affected states to carry out active case finding, risk communication and community engagement as well as laboratory diagnosis through the National Reference Laboratory (NRL) in Abuja.

“The National EOC led by NCDC continues to work with relevant stakeholders and partners to coordinate the response and monitor the situation in the country.”

He urged Nigerians to ensure they are vaccinated against the disease, to protect themselves in addition to other preventive measures.

“Yellow Fever is preventable and we must work together – government and citizens – to eliminate this threat.”

Acknowledging that poor vaccination may have contributed to the outbreak, Enugu State Commissioner for Health, Professor Emmanuel Obi, said it was not impossible that there may be pockets of people in the state who may have refused to accept vaccination.

“It is important to vaccinate children. I can tell you now that some people now may have chosen not to vaccinate which is the result of what we are seeing right now,” he said.