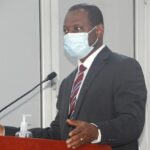 It said the new cases have increased the country’s active cases to 1,424 with the country’s confirmed cases totalling 50,457 as of November 14.

The Service also indicated on its website that four people were in critical condition while 13 were in severe state.

It added that 48,710 people had recovered from the virus but unfortunately three more persons had died from the disease raising the death toll to 323.

The service said it had so far conducted 567, 211tests since the outbreak of the disease in March this year with a positivity rate of 8.9 per cent.

It said the tests comprised routine surveillance of 195,201 tests, enhanced contact tracing, 312,988 tests and the International travellers (KIA) with 59,022 tests.

On the regional case count, Greater Accra leads with 27,116 confirmed cases, followed by Ashanti with 11,074 cases.

The Service also said that Central had1, 940 confirmed cases while Bono East had 787cases.

The Volta Region, the GHS said, has a total of 685 cases and the Western North has 657 cases.

The Bono Region has a total of 619 cases followed by the Northern Region with 551 cases.

Based on these statistics, the Service has cautioned that the non-adherence of the safety protocols could cause a spike or a second wave of infections across the country.

The GHS has, therefore, implored the entire populace to stringently adhere to the COVID-19 safety protocols, including staying at home if they had nothing doing in town, observing the social distancing protocol and avoiding hand shaking.

It reminded people to mask up properly, particularly when leaving home, and washing their hands often with soap and water for at least 20 seconds.

I am hopeful of a second term – Akufo-Addo