A massive dawn fire gutted hundreds of stalls at the Pedestrian Shopping Mall at Kwame Nkrumah Circle, close to the Odawna Market in Accra yesterday.

Most owners of the affected stalls and shops only heard about the occurrence through phone calls because of the time the fire started.

Not even the fire tender now permanently stationed under one of the sections of the Kwame Nkrumah Circle Interchange, proved useful in stopping the inferno.

Onlookers could do nothing to save the situation besides watching and videoing the heartbreaking occurrence.

Like a typical wildfire the inferno spread quickly and even threatened the nearby structures which were not part of the market architecture.

By the time personnel of the Ghana National Fire Service (GNFS) responded to the fire, irreparable damage had been inflicted on ware whose value were immediately unquantifiable.

With Xmas beckoning, many traders claimed they had stocked their stalls expecting to cash in on the Yuletide sales.

President Akufo-Addo yesterday visited the fire scene to assess the situation himself.

He was there with the Municipal Chief Executive (MCE) for Klottey Korle, Nii Adjei Tawiah and the Chief Executive Officer (CEO) of the National Board for Small Scale Industries (NBSSI), Kosi Yankey as well as the Deputy Greater Accra Regional Minister Elizabeth Sackey.

Even in their predicament, the crowd, some of who are victims of the fire, welcomed the President with chants of campaign slogan of “Four more for Nana!” and “Four more to do more!”

The President looked shocked at the extent of damage and exclaimed “oh this is really sad!”

He promised the over 3,000 traders affected by the fire that the government would support them to get back to business and also rehabilitate the ravaged market.

“I think the authorities are doing their best…fortunately the fire has been contained; they have identified who (affected) the people are, we will see what government can do to begin the process of rehabilitating the place,” he said.

Aside that, he said “a decision has been made to re-wire all the markets in Accra and obviously this will be the beginning.”

The head of Board for Small Scale Industries (NBSSI), Kosi Yankey said “we are looking at providing some support to the people who have lost their products through the fire.” 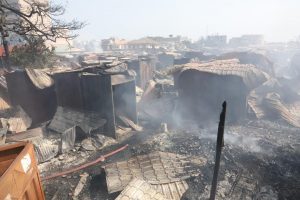 The vice-presidential candidate of the opposition National Democratic Congress (NDC), Professor Naana Jane Opoku-Agyemang also visited the place to sympathise with the victims.

She called on the government to offer support for them to get back to business.

The Pedestrian Market, the initiative of Stanley Nii Adjiri Blankson when he was the Chief Executive Officer of the Accra Metropolitan Assembly (AMA) during the Kufuor regime, houses many traders.

The market was constructed to take away hawkers off the streets, particularly the Central Business District of Accra and the accompanying inconveniences. 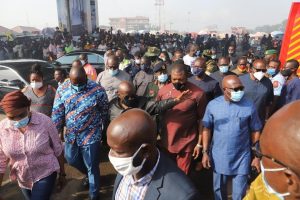 At first it was not loved, many who had taken occupancy of the stalls still selling in the nearby streets. Now it is fully subscribed and so many have been affected by the inferno.

Police officers took up positions to protect possible looting by the many hoodlums in the Circle area, most of who had trooped to the fire scene.

The GNFS should have commenced investigations into the fire, the outcome of which would take several days to be made public.

Many wonder what these reports serve, given the fact that factors such as cooking in the stalls and generally within the market which account for some outbreaks persist.

BBNaija: I’m Suffering In Life Because God Has Neglected Me’- Ifu Ennada