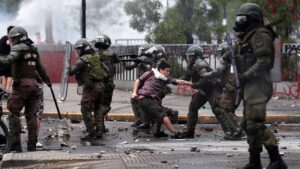 President Sebastian Pinera said in a statement he had accepted the resignation of Mario Rozas, saying he shared “the reasons and arguments” he had given for resigning.

Chile’s leftist opposition had for months called on Rozas, who was head of the Carabineros military police, to resign following criticism from the UN human rights office and other organizations over police repression of the social protests.

Police officers on Wednesday shot and wounded two minors, aged 17 and 14, at a residence for troubled children and adolescents in the southern city of Talcahuano.

Police said the officers had opened fire after they were attacked with sticks and stones at the center, run by the National Service for Minors.

Footage showed the adolescents writhing on the ground after they were shot in the legs.

“This situation is yet another manifestation of the horror of state violence exercised by those who, having the duty to protect children and adolescents, ultimately attack them in an unjustified and undue manner,” Munoz said.

The shooting was condemned by the Chilean branch of UNICEF.

“No situation justifies the use of firearms by the Carabineros to contain incidents involving minors, especially if they are under the protection of the state,” the UN Children’s organization said.

Anti-government protests in Chile that began in October 2019 and raged for months left more than 30 people dead and thousands injured, including hundreds who suffered serious eye injuries after being hit by pellets fired by police.