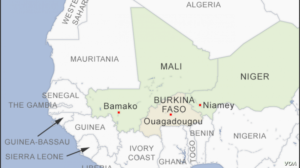 An American citizen was killed by Burkina Faso security forces outside a military base in the capital Ouagadougou on Saturday, security and diplomatic sources said.

The man was strolling outside the Baba Sy military camp to the south of the city and acting “suspiciously”, a high-ranking source in the security forces told AFP.

After he refused to comply and tried to flee, soldiers fired warning shots, some of which hit the man, according to the source.

He was immediately taken to a health centre where he died, the source added.

An official at the American embassy in Burkina Faso confirmed the death of an American citizen in Ouagadougou, without providing details.

The shooting comes with the West African country on edge as it prepares for a general election Sunday in the shadow of a growing jihadist insurgency.

Military camps have been frequently targeted, including an attack on a base near the Malian border last year that killed 24 soldiers.

The security crisis has dominated the electoral campaign and an undisclosed number of troops have been deployed for polling day in the landlocked nation, one of the world’s poorest.

No votes in the presidential and parliamentary polls will be cast in one-fifth of the country’s territory, where large swathes remain outside the state’s control and jihadists strike almost daily.

The violence has forced one million people — five percent of the 20 million population — from their homes in the last two years, and at least 1,200 have been killed since 2015.