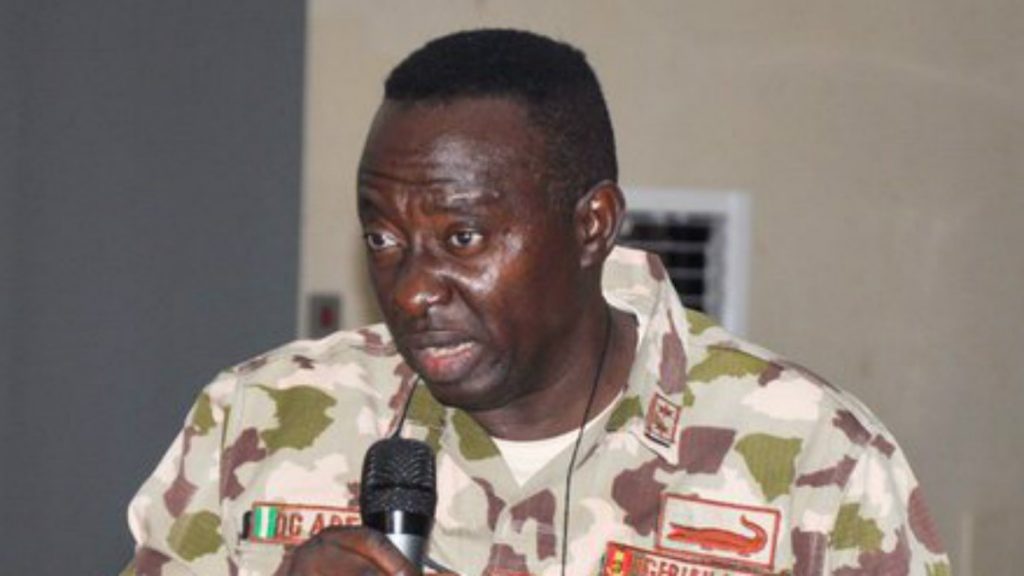 Nigerians have expressed their rage and disappointment with the Nigerian Army for convicting and demoting Major-General Olusegun Adeniyi, over a viral video, where he was seen complaining about poor weapons to the Chief of the Army Staff, Lt Gen Tukur Buratai.

Adeniyi, in March, had in a viral video asked the Nigerian government to fortify the army with sophisticated weapons to combat the Boko Haram terrorists in the North-East.

He also complained that insurgents were outgunning troops, noting that intelligence failure was responsible for an attack by insurgents that claimed dozens of soldiers.

The tribunal on Monday ruled that Adeniyi be demoted for at least three years for violating military social media guidelines.

The verdict came eight months after a video of Adeniyi complaining about a lack of military equipment to combat Boko Haram insurgents in the North-East went viral.

His aide, Private Tokunbo Obanla, whom Adeniyi said had his phone with him, was also sentenced to 28 days imprisonment with hard labour.

Sources said Adeniyi pleaded guilty to three-count of unlawful use of social media, and damage to service property amongst other issues.

While Adeniyi’s legal counsel had vowed to appeal the ruling of the martial court, Nigerians flooded Twitter with furious reactions.

“But he only stated the situation of the things respectfully, he wasn’t insulting or rebellious,” @dejinski tweeted. “They (the military) want to hear the truth, Lai Mohammed already lied that they have everything, that Buratai is the real Zombie Fela sang about.”

But he only stated the situation of things respectfully, he wasn’t insulting or rebellious. They don’t want to hear the truth, Lai Mohammed already lied that they’ve given them everything, that Buratai is the real Zombie Fela sang about

GodCreatureSon tweeted, “You only demoted him in uniform, not in the eyes of over 200 million Nigerians that welcome his truthful statements. If I were Gen. Adeniyi, I wouldn’t appeal but pray for the wrath of God to happen amid his enemy.”

While reacting, @Muhamman79794451 tweeted, “Demoted for telling the truth? Nigeria at verges again!”

Demoted for telling the truth Nigeria at verges again

Another Twitter user, @chinwengo tweeted, “This is Nigeria for you. Not worth dying for. Can you imagine the man had died? What was the compensation for the ones that have died (in the hands of terrorists)? Now, someone will tell me, ‘think of what you can do for Nigeria.’ Nonsense!”

“Absolute nonsense! I’d rather labour for a foreign country than Nigeria,” @estomolola said.

Absolute NONSENSE. I rather labour for a foreign country than Nigeria